'I knew that if I was ever going to get married, it would be with him,' says Minnie. 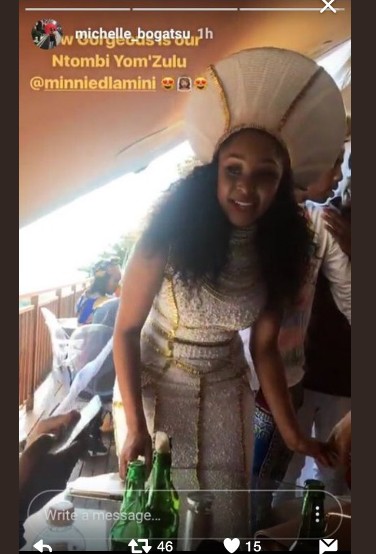 Minnie Dlamini and fiancé Quinton Jones held their traditional ceremony, umembeso, on Saturday. In pictures and videos shared on social media, Minnie can be seen in her traditional attire, with guests celebrating in song and dance.

The Zulu ceremony saw Jones’ family handing gifts to Minnie’s family to thank them for their daughter while he got to be welcomed in the family as their son-in-law.

Basetsana Kumalo was one of the guests.

It proved to have been a busy day for her as she also attended Bonang Matheba’s birthday celebration.

Also in attendance were Zakes Bantwini, Unathi Msengana and Anele Mdoda, to name but a few.

In a recent interview with DJ Fresh and Somizi on Metro FM, Minnie said she used to tell her fiancé before their engagement that they should not get married but stay together and call each other “life partners”.

The idea of getting married was “too sensantionalised” for her and she was just “over it”.

“I was over the fairy tale, I just wanted to be loved and love. But I knew that if I was ever going to get married, it would be with him,” she said.

However, all that changed when she got engaged to her boyfriend last year in December.

Check out some of the pictures and videos shared on social media below:

Hope you forgive me for making you misbehave so early in the morning ‍♂️ @jessicankosi What a great day. #iminienhlekwaminenhle

What a beautiful traditional wedding we enjoyed everything Congrats @MinnieDlamini and her hubby @Quinton our ???????????????? what a humble couple pic.twitter.com/0E2ZkzEibQ

Is Bonang Matheba ready for motherhood?
6 days ago
6 days ago

Is Bonang Matheba ready for motherhood?
6 days ago
6 days ago