Gabrielle Union opens up to Trevor Noah about racism on AGT

Noah said he did not think in 2020 that the environment of systematic racism in the workplace would be addressed with such depth, praising Union for starting the conversation. 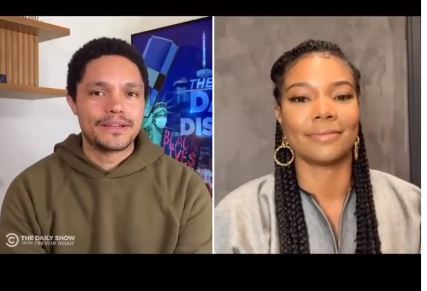 Actress Gabrielle Union has been very candid and honest about her experience as a judge on America’s Got Talent (AGT), where she has alleged racism and discrimination took place on set.

Speaking to Daily Show host Trevor Noah, Union did not hold back, accusing Simon Cowell of being a ‘rule breaker’ and describing how toxic the set was.

She said it is scary to speak out and name people: “Honestly it has been one big anxiety attack between the global pandemic, and waking up every day and seeing the brutalisation of black bodies. The nonstop of trauma, it just feels like terror in my body.”

Noah said he did not think in 2020 that the environment of systematic racism in the workplace would be addressed with such depth, praising Union for starting the conversation.

Union thought being a judge on the show was going to easy: “But day one, Simon Cowell is smoking cigarettes inside. I have worked a long time with a lot of people, I had never experienced that. So when your boss doesn’t believe that the rules or laws apply to him and does it in full view of NBC and no cares that he is exposing everyone to second hand smoking. That is day one, within the first hour.”

Union said this type of behaviour sends a wrong message on set because when people brought up real issues such as racism, the lack of accountability in addressing ‘minor’ issues showed because there were no consequences in the deeper issues.

The network decided to institute an independent investigation after allegations surfaced from Union and other employees of discrimination and racism.

She said her information to the investigation was given to the NBC head Paul Telegdy who then used it as a ‘smoking gun’ to shoot down her claims.

“He then threatens my agent, ‘Gabrielle better watch who she calls a racist’, in middle of an investigation. This is what was happening at the very top.”

Union hopes her speaking out will help expose the ‘bad apples’ within companies, and bring about more representation across the board as well as fixing internal affairs to have conducive working environments.