Former 5FM radio host Thando Thabethe made it clear she stood firmly by Nampree and has contributed to legal fees in the rape case against Fresh and Euphonik. 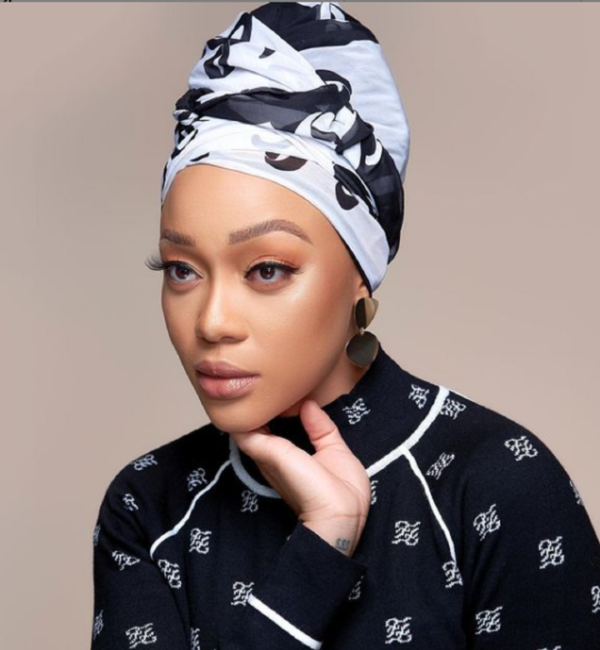 Actress Thando Thabethe is the latest woman to get a primetime slot that was previously reserved for boys. Picture: Instagram

Gender-based violence organisations and activists are rallying behind the woman known as Nampree who accused DJ Fresh and Euphonik of rape.

Earlier this week the mounting frustration from celebrities eventually spilled out, with former 5FM radio host Thando Thabethe making it clear she stood firmly by Nampree. Others also spoke out, including Boity and Zozinbini Tunzi.

Thabethe said she was willing to pay for Nampree’s legal fees and in a now-deleted tweet from Women for Change they shared that Thabethe had contributed to Nampree’s legal battle against the DJ Fresh and Euphonik. 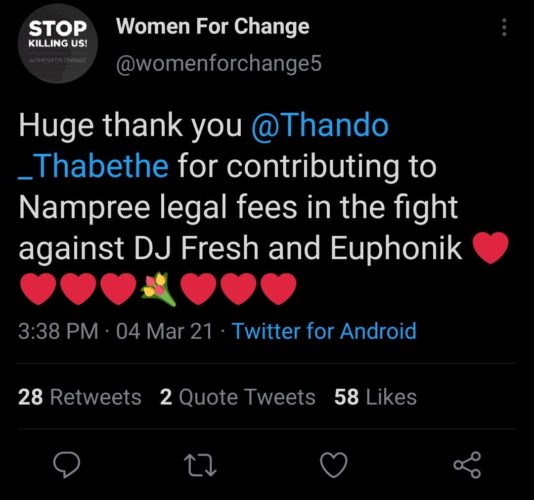 EVERY WOMAN IS YOUR SISTER, THANK YOU FOR TREATING HER ACCORDINGLY

The Citizen has reached out for comment from Thabethe she said: “I am grateful that, through hard work and determination, today I am in a position to help those less fortunate than myself. Giving back by practising paying it forward is something I am privileged to do.  From time to time, I am approached to provide support to causes close to my heart. However, when I do so it is at my own discretion, in my personal capacity, and as such remains private.”

Media personalities and activists Ntsiki Mazwai and Penny Lebyane gathered outside Sunday World offices on Thursday to hand over a petition after a damning article was run by the publication, entitled “Rape accuser apologises to Euphonik – ‘I’m sorry for what I did to you and DJ Fresh, I am scared’”.

They believe the article was done without fact-checking the authenticity of a WhatsApp message Euphonik shared on Twitter and that it shared confidential information about the case. Despite the case being dropped for lack of evidence, the parties involved are still trading allegations against each other. Nampree is fighting the claims that she lied about the rape accusation.

@euphonik Your lawyers sent mine a letter izolo asking that we stay of social media bc we were about to expose you and Dj Fresh kanti you’re gonna wake up and photoshop this???? Uyandinyela and I won’t let this slide. Uyabona ngoku? Mazlime ziyetyeni

Euphonik later removed the tweet which also showed Nampree’s personal number. She was later spammed with numerous calls and messages from strangers.

After their petition was received by the Sunday World’s editor, they deemed their action successful.

What I know for sure is that Nampree won’t be bullied anymore ????

Sandisiwe Mbhele is a digital content producer covering lifestyle, entertainment and current affairs news. She has always aimed to inform readers of the best content out there since her days at Caxton Greater North publications in 2019. Producing content that mirrors her interests and opinions, with an honours degree in Media Studies, she enjoys writing stories of the people behind the headlines in the arts, food and culture industries.