'It seems as though the terrapin was actually more interested in getting some blood, as opposed to chasing the lions away,' says game guide.

Terrapins are one of the smallest species of turtles living in fresh water. They have been alive for more than 180 million years and trace back to the time when the now extinct dinosaurs were roaming the earth.

Latest Sightings shared a humorous video on YouTube of a snappy terrapin attempting to chase lions away from the waterhole where it lives.

The video shows a pair of lions drinking water at the waterhole after what seems to have been a hunt as they both had blood on their muzzles. The tiny turtle, smaller than a lion’s paw, swam to the lions to stop them from drinking his water.

The funny and adorable fiasco was spotted by 30-year-old safari guide Regi Barreto while on safari with a guest near the Sand River in MalaMala Private Game Reserve in the Kruger National Park.

The lions, a little confused but obviously not shaken or scared, drink from the waterhole, but the determined terrapin continues to be a nuisance, making it hard for the lions to enjoy the water.

“I knew the lions would look for water to drink and we positioned ourselves in the perfect spot with the sunlight in our favour, ready for the sighting. What came next we did not expect – I was pleasantly surprised when the terrapin came out of wallow towards the male and then the lioness,” says Barreto.

“It was an incredible rare sighting for me to film – watching the terrapin approach the lions that had blood on their chin from the zebra. It seems as though the terrapin was actually more interested in getting some of that blood, as opposed to chasing the lions away.” 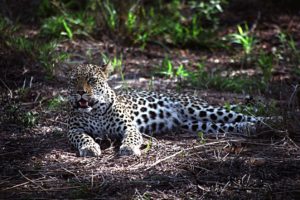 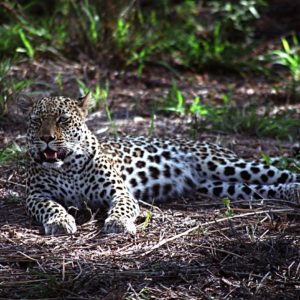