TikTok star from Dunkirk, New York proudly flaunts her dentures after losing her teeth while she was pregnant. 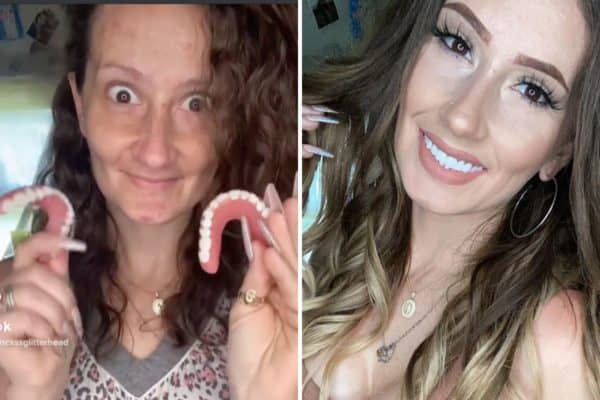 This Tiktok star went viral and gained a large following after flaunting her dentures. Picture: Instagram

The TikTok star now has 1.4 million followers thanks to her transformation videos in which she can be seen applying make-up and putting in her dentures.

According to The Sun the toothless TikTok New York native lost her teeth while she was pregnant with her first daughter 15 years ago.

“Alicia suffered an extreme loss of calcium which led to her teeth becoming hollow and brittle on the inside and randomly falling out,” The Sun reported

The publication said “she was unaware she was genetically predisposed to extreme calcium loss during pregnancy”.

While it is unknown what the toothless TikTok star does for a living, she enjoys playing around with make-up.

Why teeth fall out during pregnancy

According to Vision Alert, hormonal changes during pregnancy can increase the acidity in the mouth, leading to an increase in cavities.

“This also can be due to an increased sugar intake caused by cravings and a decrease in attention to preventive dental care,” said obstetrician and gynaecologist Meredith Watson-Locklear .

Watson-Locklear added that ligaments and bones in the mouth “temporarily loosen during pregnancy, resulting in teeth wiggling slightly. This doesn’t increase tooth loss, but it can be alarming. Other conditions can also lead to loose teeth, so it’s a good idea to get this checked out and confirm the reason for the movement.”