Meghan and Harry have finally offered to fly to the UK soon to introduce their daughter Lilibet to the Queen and the royal family. 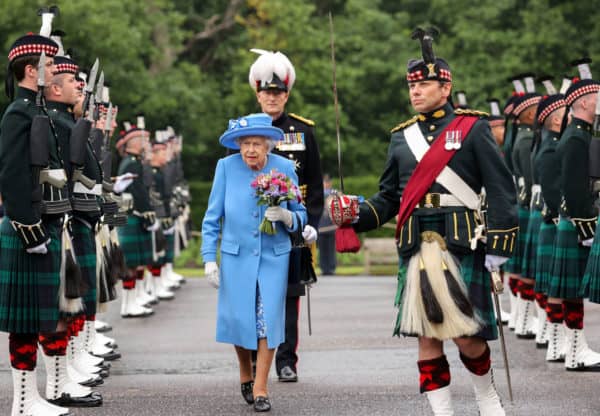 Britain's Queen Elizabeth II and Governor of Edinburgh Castle, Major General Alastair Bruce of Crionaich (behind) attend the Ceremony of the Keys at the Palace of Holyroodhouse in Edinburgh on June 28, 2021. - The Queen is in Scotland for Royal Week where she will be undertaking a range of engagements celebrating community, innovation and history. (Photo by Chris Jackson / POOL / AFP)

In this week’s Royal update; the Duke and Duchess of Sussex are looking forward to travelling to the UK to introduce their daughter Lilibet to their royal family members.

Kate and Prince William also make changes to their Royal Foundation with the inclusion of diversity, Archie and Lilibet are expecting a new playmate, and Queen Elizabeth remains the most popular royal family member.

The Sun recently revealed that Meghan Markle and Prince Harry have decided that they will soon fly to London with their children to visit the Queen and introduce her to their youngest child, Lilibet, but it is unclear whether the couple will spend Christmas with the Queen this year.

The Duke and Duchess of Sussex have not spent Christmas with Queen Elizabeth in the past two years.

In 2019, the couple spent Christmas in Canada instead of with the royal family, and in 2020, the couple could not fly to London to spend Christmas with their family because of the Covid-19 pandemic.

In the bombshell interview that Meghan and Harry had with talk show host Oprah Winfrey, Meghan spoke out about the racist comments which she received from inside the palace with regards to her son’s skin colour.

Shortly after the interview, a statement was released from the Palace which said: “The whole family is saddened to learn the full extent of how challenging the last few years have been for Harry and Meghan.‌

“The issues raised, particularly that of race, are concerning. While some recollections may vary, they are taken very seriously and will be addressed by the family privately.”

The royal family had not yet made any comments or given an update since their statement was released, but the Duke and Duchess of Cambridge’s Royal Foundation recently changed their annual report to set formal targets for diversity.

“Diversity has always been considered in trustee recruitment and improving this has been a particular focus for the board and governance and nominations committee in 2020,” said the report.

In the latest YouGov poll, there has been a major change in the rankings of the royal family members following the explosive interview that Meghan and Harry had with Oprah Winfrey, as well as the legal challenges brought against Prince Andrew.

Results on the poll show that Queen Elizabeth remains the most popular royal family member with Brits, with 80% of the public having a positive opinion of the monarch.

Her son Prince Andrew remains the least popular member and has been given a negative opinion by 83% of the public.

Kate and William remain favoured members of the royal family by the public, after scoring 79 and 75% of positive opinions from the Brit.

Archie and Lilibet are expecting a new playmate

Meghan Markle and Prince Harry’s two children will soon have a new playmate, as it was revealed that his childhood friend Guy Pelly and wife Elizabeth Wilson are expecting their third child.

Speaking to Eden Confidential Social Diary, Wilson announced that she and her husband are expecting another baby and that they could not be happier.

“We are expecting Pelly number three and could not be more excited,” she said.

Pelly grew up with Prince William and Harry, and when William’s first, Prince Louis was born, the Duke and Duchess of Cambridge made Pelly his godfather.