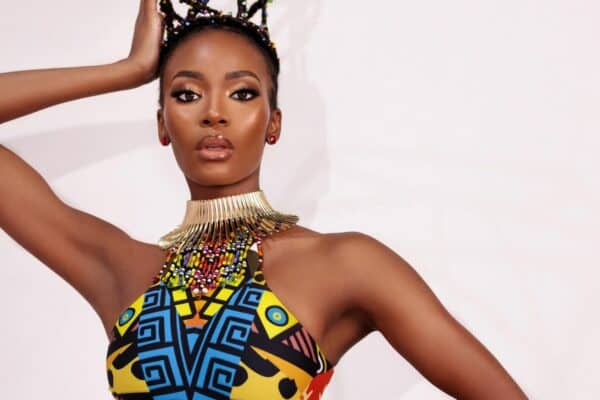 Miss South Africa 2021 Lalela Mswane has been identified as one of the favourites at Miss Supranational 2022.

South Africans are behind the reigning beauty queen heading into the finale, taking place later today.

Mswane has been in Nowy Sącz, Poland, for a few weeks gearing up for the big day. Considering polls and fan votes, she has been voted into the contest’s coveted top 10.

As the finale nears, Miss SA revealed her national costume, should she win. Mswane’s costume gown pays tribute to her Zulu heritage and was designed by Cape Town based fashion designer, Lloyd Kandlin, who is also the director of the costume department in Miss SA.

Kandlin was responsible for creating the costume worn by Miss SA 2019, Zozibini Tunzi, who went on to be crowned Miss Universe that year.

Mswane says she is descended from a proud and strong warrior tribe, the “revered Zulu Nation”.

“My national costume captures some of my unassailable heritage,” she wrote on Instagram.

She continued to say the costume is very special.

“I am not just representing South Africa, I am also an ambassador for the Zulu people and have taken their support, love and blessings to Poland with me as well.”

Kandlin described the details of the dress, saying the beaded crown is the representation of the power of black women, “whose strength – like Samson in the biblical story – lies in their hair”.

He added the dress was inspired by the balance of a chaotic everyday life by using vibrant print and colours with perfect symmetry.

Mswane’s participation at the 13th annual Miss Supranational came with much controversy, after the Miss SA organisation chose her rather than the runner-ups, as previously decided.

In December 2021, Mswane represented the country in Miss Universe in Israel.

Social media commentators felt the organisation was favouring Mswane over Miss South Africa 2021 runner-ups – Moratwe Masima and Zimi Mabunzi – who weren’t given a chance to represent the country on the international stage.

Miss SA organisation defended their decision as they felt Mswane was the right choice.

The Miss Supranational 2022 finale will be streamed on their social media pages, from 9pm.