Is ‘Squid Game’ season two on the way?

'Squid Game' creator Hwang Dong-Hyuk says he is in the planning phase of season two of the hit show, and he just needs to write it all down. Netflix’s biggest-ever launch hit could be getting a second season. That is if the show’s creator, Hwang Dong-Hyuk, finishes planning it out.

Speaking to Associated Press at an event celebrating Squid Game in Los Angeles this week, Hwang said demand for a second season of the show had been so great that it felt as though fans left the show’s creators no choice.

“There will indeed be a second season. It’s in my head right now. I’m in the planning process currently.”

“But I do think it’s too early to say when and how that’s going to happen. So, I will promise you this… Seoung Gi-Hun will come back and he will do something for the world.”

Squid Game is a South Korean survival drama series that debuted on Netflix this year. It became an instant hit in various countries around the world, drawing over 130 million fans and has even impacted people’s fashion choices.

The stars of the film have also reaped the benefits of being part of such a successful show after amassing millions of followers in the weeks following the show’s release.

The success of the show also increased calls for Netflix to produce more international and non-English language content.

In February, the world’s most popular streaming platform announced plans to spend $500 million this year alone on series and films produced in South Korea.

The hit show also seems to be doing its bit to boost South Korean tourism.

“The South Korean Netflix hit Squid Game has been taking the world by storm, and now it seems it’s inspiring South African holidaymakers to explore a trip to Korea,” stated travel search engine Cheapflights in a statement last month.

The travel search engine’s comment comes after they saw a spike in people searching for flights to South Korea since the show premiered in South Africa on 17 September.

In fact, Cheapflights data shows that searches rose by around 40% month on month.

“More than 130 million people have watched the dystopian drama series so far, with filming locations including the island of Seungbong-ri, and Daejeon, South Korea’s fifth-largest city. There is plenty of Squid Game-themed sightseeing to experience,” added Cheapflights. 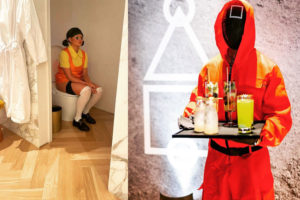 Netflix's 'How to Ruin Christmas: The Funeral' trailer drops
3 weeks ago
3 weeks ago

Netflix's 'How to Ruin Christmas: The Funeral' trailer drops
3 weeks ago
3 weeks ago