Jockeys look forward to Christmas but have to watch their diets. 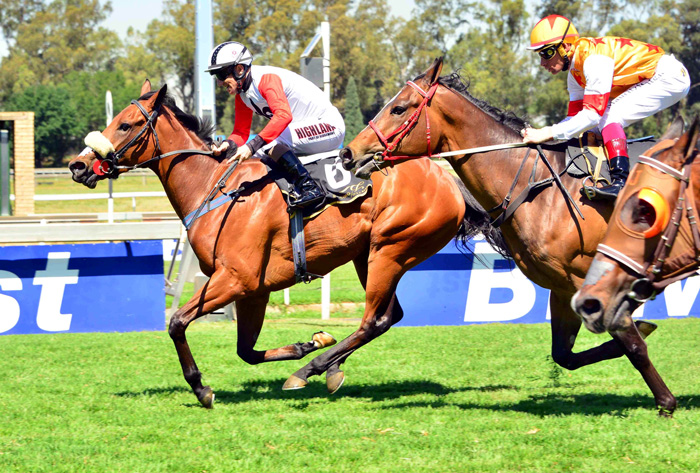 PIERE’S PICK. Regal Graduation, who runs in Race 5 at Turffontein today, is the horse Piere Strydom has made a banker in all bets.

It’s getting close to Christmas and a number of the jockeys are taking some family time. There are a few reasons for the time off. It is obviously a mixture of suspensions, injuries and just enjoying the holiday period.

I’m taking off next Thursday as that is the only meeting during the week on the Highveld and it gives me a week off. As I have pointed out before there is a chance you could lose out on some of your regular rides which is not always a good thing as if some other jockey picks them up and has some success, no matter how limited, you do face the possibility of not getting the ride back.

But you do need to charge the batteries again, both mentally and physically. It’s a time of the year where everybody wants to be festive. From a jockey’s point of view we also try to be festive as we can but unfortunately we have to watch our diets and that does seem to spoil some of the fun.

In just two weeks’ time we have the Grade 1 L’Ormarins Queen’s Plate to look forward to. You have champion Legal Eagle as the older horse, a number of pretenders to his throne in the likes of Rainbow Bridge, Buffalo Bill Cody, Undercover Agent and Snowdance and then youngsters like Cape Guineas winner Soqrat. To see a quality field like this is fantastic as we keep constantly get asked when the new horses are going to be coming out.

Today we are racing at Turffontein on the Standside track and we start with a Maiden Plate. My first choice is Hartleyfour and on current form he should be hard to beat.

His dangers include lightly raced Censorious and possibly Ice Eater. However, the biggest threat could come from an unraced horse so watch for any significant betting movements.

I ride Winter Twilight who could run a place in this field but I’m always unsure of Scottsville form lines because often they don’t work out well on the Highveld. He has been claiming 4kg in his last two starts which he does not get now so that could make his task more difficult.

Race 2 is a handicap over 1400m where obviously form comes into play, but a good draw is a huge advantage. My first choice is Camel Walk. His merit rating has dropped nicely and off a good draw he could be a bit of value. The obvious danger is Bold Coast who has good form and also has a good draw. Another threat could come from Judd’s Rocket but Camel Walk and Bold Coast should get you through the BiPot.

Race 3 is a Maiden Plate over 1400m and once again the draw needs to be taken into account. For that reason I’m leaning towards Gold Lightning who has some nice form and is drawn No 1. Over Sharing and Armstrong look the dangers but they have shocking draws.

For the Place Accumulator you could consider bankering Gold Lighting but if you are not sure include the other two.

I ride Eureka Effect who hopefully will make some improvement in blinkers.

Race 4 is a fillies’ handicap and once again taking form and draws into account my first selection is La Linea. She is dropping dramatically in merit rating and she also has a good draw. The obvious danger is Perfect Tigress. They could be good enough for the PA.

For the Pick 6 you need to include my ride, Vi Va Pi Pa. When she won first time it was against winners and in her last start she was well beaten but it was in feature-race company.

Race 6 is a Middle Stakes which is not a handicap so that should suit your best handicapped runner and that is Arte. My concern is that she’s had quite a few runs of late over the staying distances and for that reason Wonderous Climber needs to be included. They should be good enough for the PA but for the Pick 6 add in Parisienne Chic.

Race 7 is a tricky race even though it is an Assessment Plate because often your best-handicapped runners come out on top. There are some youngsters who could improve and they are Popsicle Toes and Protea Paradise.

However, the two horses who should fight it out are Atyaab and Samurai Warrior. Samurai Warrior is a potential PA banker but for the Pick 6 include Atyaab and possibly Popsicle Toes and Protea Paradise as they can make the improvement.

Race 8 is a handicap with none of the runners standing out and many having chances. My selections are Power Beauty, Volcanic Sunset, Bosphorus, Defy Gravity and Leftrightgoodnight. For the PA pick as many as you like but for the Pick 6 include them all as well as Genesis.

Race 9 is another handicap with many horses having winning chances. But my first selection is Mattina.  Her merit rating has dropped and she has a 4kg claimer up and a good draw as well.

For the Place Accumulator also include Angelic and Samarra. For the Pick 6 add in Poormanslady, Ossetra, Wings Of Light, Kissmeinmydreams and Gypsy Queen are possibilities.