She is another who is an out-and-out 1000m runner at this stage of her career so there will be plenty speed upfront. 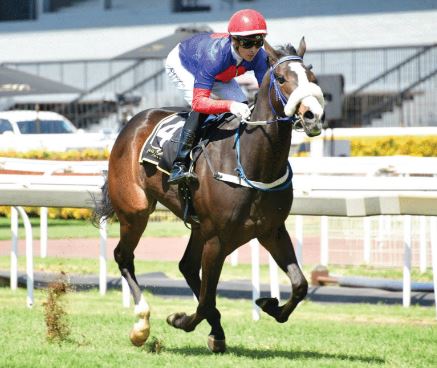 Racing at the Vaal.

Tropic Sun had an astonishing debut over 1160m at Turffontein last month when she raced away for her opposition to win by 5.25 lengths.

There was not much be ing support for the Sean Tarry-trained runner who actually dri ed slightly from an opening call of 5-1 out to 6-1. This daughter of Skit Skizzle makes her second visit to the track tomorrow when she lines up in Race 7, a Graduation Plate for fillies and mares over 1000m on the Vaal Classic track.

Although she drops slightly in distance, she does have enough pace to chal- lenge this fi eld over 160m less. The form of her maiden win has worked out quite well as 10th placed Christmas Flower, beaten 10.25 lengths, came out to win her next start.

Fourth-placed Samoa also raced again and she fi nished second to Allyouneedislove, who has been withdrawn from this race. Tropic Sun looks to be a runner to follow and another impressive performance will surely make her a contender for some of the upcoming feature races. Raymond Danielson takes the ride again.

Singforafa would have been hard to beat in this race but she won last Thursday to notch up her third win. As this is a Graduation Plate, which is only open to one or two-time winners, Corne Spies’ runner has come out of this race.

The danger looks to be Fly Away who has raced four times for two wins. Interestingly, both those wins were over 1000m and she has only lost when travelling a little further than the minimum trip.

On that basis, this Paul Peter-trained runner must come into the reckoning. While Spies will have to withdraw Singforafa, he still saddles speedy True Charm who could be a danger in this field.

She is another who is an out-and-out 1000m runner at this stage of her career so there will be plenty speed upfront. Another runner who looked good at the Vaal last week was St John Gray’s At Hand.

This four-year-old son of Call To Combat has been lightly raced, only making his debut as a three-year-old in January. He won that race and after two poor runs, he was given a rest.

He came back on 8 October and ran a 1.20-length third behind Waqaas and last week was backed in from 10-1 to 9-2 and went off as TAB favourite. At Hand ran on nicely to finish second, beaten a neck by Bien Venue.

He drops in class in Race 6, a MR 72 Handicap over 1600m and although he carries 8kg more, Gray’s runner looks the horse they will all have to beat.