Jonsson, Nielsen get it all

It took 37 lots before the magical million was reached and up until then, the best price had been R900,000 for a What A Winter colt who was sold to Snaith Racing. 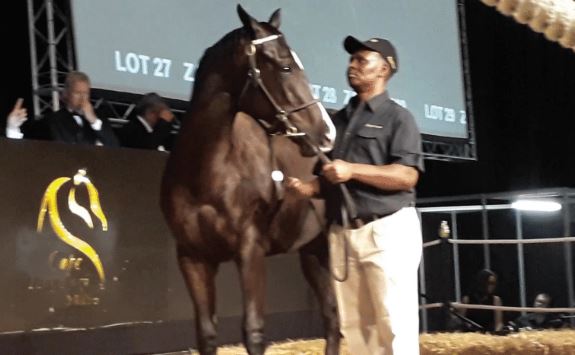 GOT IT ALL. Silvano colt I Want It All fetched the early best price at the Cape Premier Yearling Sales in January, being knocked down for R3 million. Picture: Jack Milner.

Lot 99, a colt by Silvano out of Song Of Happiness named I Want It All at the Cape Premier Yearling Sale in Cape Town yesterday, was sold to Nic Jonsson and Bjorn Nielsen for R3 million.

Bidding was brisk on the beautifully bred colt and quickly went past the R1-million mark and continued steadily from there.

Jonsson and Nielsen bought a half-sister by Duke Of Marmalade at last year’s sale for R3.3 million who is currently with Justin Snaith. Jonsson is a shareholder in dual Durban July winner Do It Again while Nielsen, who was born in South Africa but spends most of his time in the UK, owns arguably the world’s best stayer, Stadivarius, who is trained by John Gosden.

The mare, Song Of Happiness, is by Giant’s Causeway out of multiple Grade 1 winner in both South Africa and France, Captain’s Lover. Shortly after that, Lot 120 was sold for R1.8 million.

All That Jazz was bred by Avontuur Thorough- bred Farm and is a filly by Trippi out of former champion South African sprinter Val De Ra. This daughter of Var was an 11- time winner which included three Grade 1s.

She is also the dam of Miss Frankel. She was sold to Yolo Thoroughbreds (Pty) Ltd, who bought her on behalf of an unnamed syndicate.

The first yearling to go over the R1-million barrier was Live My Life, a filly by Gimmethegreen- light out of Muamba, bred by Avontuur Thoroughbred Farm. She was sold for R1.1 million.

The filly was bought by Derek Brug- man on behalf of Silver Ripples (Pty) Ltd. “She was a bit of a standout,” said Brugman. “I thought she was one of the three or four best fillies on the sale.”

It took 37 lots before the magical million was reached and up until then, the best price had been R900,000 for a What A Winter colt who was sold to Snaith Racing.

There was little to enthuse about in the early part of the sale with some of the lots going for disappointingly low prices. Even after the three big sales, the average (after 125 of the 232 lots) was R339,789, compared to last year’s R435,208.