Trainer Brett Crawford, looking for his second J&B Met victory, is confident he has Futura very much on song for Saturday’s big race. 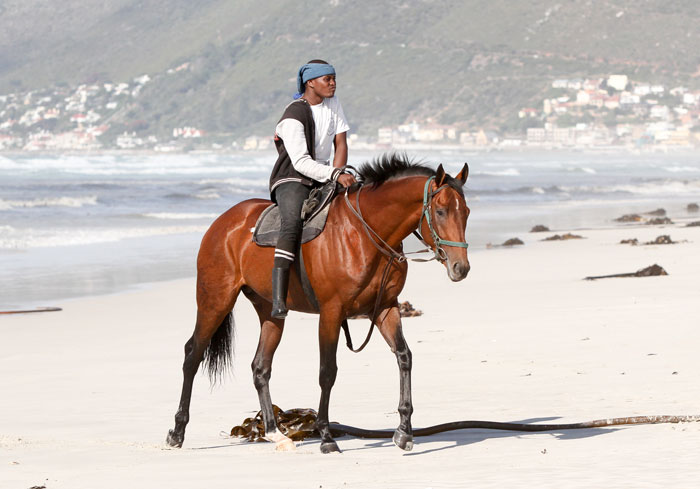 RELAXING. Futura pays a visit to Muizenberg Beach as part of his preparation for Saturday's J&B Met over 2000m at Kenilworth. Picture: Liesl King

“He came out of his L’Ormarins Queen’s Plate win very, very well and there is no doubt the extra distance will be in his favour,” says the Philippi trainer.

“He won the Champions Cup over 1800m and he is crying out for this trip.”

Asked whether the last point was not put in doubt by the way the colt produces a phenomenal turn of foot, Crawford replies confidently: “That’s what good horses do.”

He also has no worries about the pace: “We are drawn nine, basically in the middle of the field, so we’ve got options depending on how quick they run or if they go slow. Bernard can make that decision, but the nice thing about Futura is that he is a versatile horse. If they go slow it won’t worry us. If they go quickly it won’t worry us either. I think we can pretty much put him wherever we want really.”

The betting suggests a three-horse race – Futura, Louis The King and Legislate – and Crawford comments: “I thought all three put up good gallops last Thursday and Louis The King had a very good first Kenilworth run in the Queen’s Plate.”

Crawford, 43, won the 2003 Met with Angus while rider Bernard Fayd’Herbe was twice successful on Pocket Power.

Crawford, son of a Harare accountant, began riding work when he was 13 and rode as an amateur in Zimbabwe, winning races on the flat and over hurdles. His first job after leaving school was with Neil Bruss and he worked as an assistant trainer to Mike de Kock, Peter Muscutt, Eric Sands and Dennis Drier before being appointed private trainer to Sabine Plattner in 2001.

He won seven Grade 1s for her and, after a quiet spell when her horses were not enjoying their previous level of success, he decided in 2009 to leave her and set up on his own. He has hardly looked back since and now has one of the most powerful stables in the country.