Singer and actress gives a sneak peak on playing the ‘Black Widow’ in Gucci film. 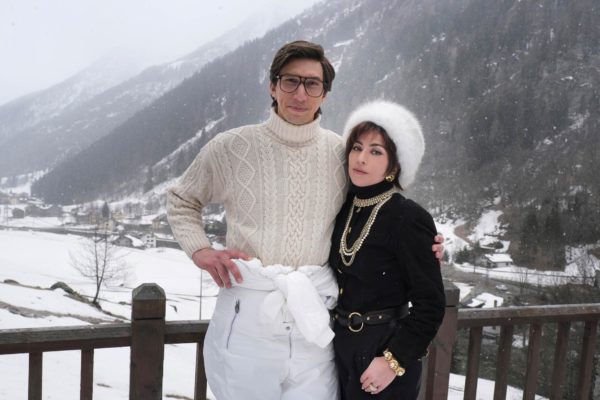 The first look at the Gucci movie is a glimpse of actor Adam Drive and singer and actress Lady Gaga draped in luxurious white designer snow wear on what has been said to be the set of the movie House of Gucci. Lady Gaga posted some of the images of the project on her Instagram giving fans a glimpse of what’s to come.

The chilling well-styled images make the actors look like doppelgangers of the lead roles they play. The bio drama is an account of numerous entanglements, murder and a sensational court case.

The Ridley Scott-directed movie is based on the real-life story of the married power couple who wed in 1972. Patrizia Reggiani (Gaga) and Maurizio Gucci (Driver). Maurizio plays the heir to the Gucci Empire. Set in the 1970s, the movie seems to go into the details of the marriage and relationship woes of the couple.

From their divorce in 1985, which was only settled in 1991. This was partly because Gucci walked out on his wife for another woman, Paola Franchi, telling Reggiani that he was going on a business trip and just never bothered to return.

He was shot and murdered by a hired hitman outside his office in March 1995. Reggiani was arrested in 1997 for the killing and given the name ‘The Black Widow’ by the press in Italy.

It was found she’s paid $365 000 for the murder and landed up getting a 29-year prison sentence. Upon her release, she made extremely flippant remarks about his killing when asked why she didn’t shoot him herself by the press. She casually remarked: “My eyesight is not so good. I didn’t want to miss.”

A post shared by The House of Gucci (@thehouseofgucci)

According to Vanity Fair, the project based on a script by Roberto Bentivegna has been in the works for a decade. Gaga has become a highly sought after and respected actor after her Oscar win for the movie A Star is Born.

Adam Driver is well known for his roles in Star Wars and recently opposite Scarlet Johannessen in the Oscar award-winning movie Marriage Story.

A post shared by The House of Gucci (@thehouseofgucci)

Traditionally previously aired bio-pics about popular fashion designers have not faired well with on-screen audiences. American Crime Story: The Assassination of Gianni Versace, currently on Netflix got an audience rating of 89% on rotten tomatoes, while it received mixed reviews from critics saying that it was a bit disappointing. There is much anticipation to watch Gaga take on the very colourful character of Reggiani. The movie is set for release on 24 November 2021.