Beer bellies, paunches, love handles... when summer vacations kick off, women aren't the only ones experiencing anxiety about the famous 'summer body.' 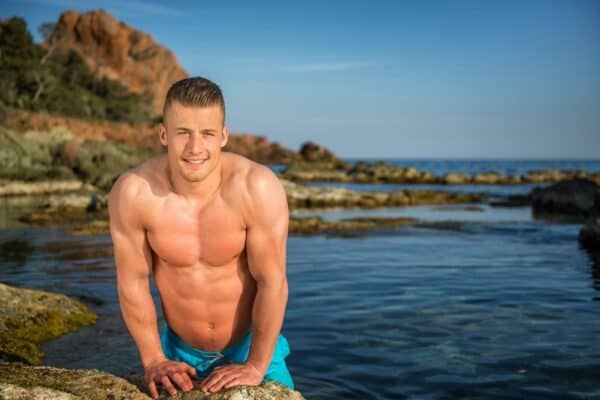 Men are also the target of some judgmental looks and comments if they aren’t showing off a toned six-pack, a full head of hair, and a wrinkle-free face.

While women are attempting to challenge body stereotypes presented in the media in order to free themselves from them, men, on the contrary, continue to strive to attain a certain beauty ideal, despite the movement towards greater acceptance for all shapes and sizes.

Are men ready to shatter the so-called ideals of masculine appearance? While some Hollywood stars seem to be moving in this direction, many men, liberated from stereotypes surrounding men’s cosmetics, are, on the contrary, trying to rid themselves of their complexes in a quest for “perfection.” Say goodbye to ‘dad bods,’ baldness, wrinkles, and shapeless pecs; these men are contributing to the cultivation of beauty standards that enshrine youth and virility. Movements designed to promote accepting your body no matter what shape or size can go back where they came from.

ALSO SEE: What is ‘filler face’ and why is it becoming a problem?

Over the last decade, and even more so since the beginning of the pandemic, men have been striving to challenge clichés related to beauty, well-being and cosmetics. Men’s cosmetics are no longer relegated just to shaving or aftershave, and men are now demanding all the products and services necessary for waxing, massages, scrubs and anti-aging treatments. As a result, numerous brands have all launched mixed ranges of skincare, or ranges entirely dedicated to men, or even make-up designed for these gentlemen. The trend has been bolstered by influential personalities, such as Harry Styles, Alex Rodriguez, and Machine Gun Kelly. And this trend has been reflected in the types of plastic surgery that men are choosing.

In France “the demand for cosmetic surgery has increased among men. Because the taboos are a thing of the past, men want to maintain their looks and stay in shape. They don’t necessarily think about it in terms of beauty, but they want a dynamic and attractive appearance,” explains Dr. Catherine Bergeret-Galley, plastic surgeon and vice president of the French Society of Plastic Surgeons (SOFCEP). “Essentially they come in requesting improvements in their body and face. They want to treat the neck, especially in case of a double chin, a nose that is too big, protruding ears,  after-effects of acne, or bags under the eyes.”

While it’s above all a question of staying in shape – with the implication of workout sessions – and of maintaining a youthful appearance, men, like their female counterparts, are also attempting to banish certain complexes, whether symptoms of a genuine unease with oneself or the consequences of the societal injunctions to which they too are subjected. While such societal ideals weigh much more heavily on women, the male beauty ideal remains a reality, even if recent years have seen a proliferation of types of masculine beauty. Tall, strong, muscular, with a full head of hair, and virile, the concept of the perfect man is also permeated with all sorts of clichés, although beauty standards are diverse and vary from one region or culture to another. Something which has been accentuated in recent years by social networks.

“Men often ask for a more manly face… we have more and more requests from women to be more feminine and on the other hand men who want to be very masculine. It doesn’t matter if they are heterosexual or not. Men want both their face and their body to appear more virile,” underlines Dr Bergeret-Galley. Certain physical traits, once seen as attractive for men, are now criticized as unkempty. This is the case, for instance, of salt-and-pepper hair as well as the ‘dad bod,’ (in other words a soft paunch), which is now the target of some sharp-tongued comments on social networks as well as in the media.

And Jonah Hill, victim of several incidents of ‘fat shaming,’ can attest to that. The American actor and director asked his followers a few months ago to stop making comments – good or bad – on his weight, because it wasn’t helpful. “I don’t think I ever took my shirt off in a pool until I was in my mid-30s, even in front of family and friends. Probably would have happened sooner if my childhood insecurities weren’t exacerbated by years of public mockery about my body by press and interviewers,” he wrote.

Let’s be clear, men’s bodies are also scrutinized, judged, and mocked, which can contribute to a palpable sense of unease, as well as a host of complexes. For the French plastic surgeon’s clients “this translates into a desire to get very broad shoulders, pectorals, six-packs, well-muscled buttocks, as well as eliminating love handles. The stereotype of the aging intellectual with glasses, paunchy and still sexy, is over,” she notes. And this aesthetic may last a while because unlike women, there does not yet seem to be a general embracing of the body positive movement, advocating self-acceptance, among men.

ALSO SEE: If you want to lose weight, have breakfast at this time

The seeds of change

Some Hollywood stars, like Zac Efron and Channing Tatum, have started rebelling against the incessant body shaming suffered by actors – and actresses – as well as by the public. Zac Efron spoke about his ultra-muscular figure in Baywatch, explaining that he never wanted to be subjected to such a drastic diet to get his famous six-pack, while Channing Tatum clearly outlined that he had to starve himself and do a lot of training in order to show off such muscles in his movies, noting that it was a job in itself.

In 2019, actor Richard Madden, known for his roles in Game of Thrones and Bodyguard, went even further by talking about the pressure felt by actors to lose weight, and display a sculpted and muscular silhouette. “We’re projecting a very unrealistic body image,” he told Vogue UK, pointing out that men were, like women, subject to clichés and objectification.

Although such instances of acknowledgment remain rare, they suggest that men may soon be advocating self-acceptance and embracing all body shapes and sizes. As taboos about male beauty get lifted, this genuine societal advance will only benefit the majority if it allows men to look to their own well-being, not just to the image they are supposed to project.