BMW i8 Roadster teased ahead of official reveal

While sales are slated to commence in 2018, we won’t be too surprised if BMW will reveal the i8 Roadster in the months to come. BMW has yet teased us with a clip depicting its i8 plug-in hybrid droptop wearing an extensive camouflage to hide its already very familiar shape. 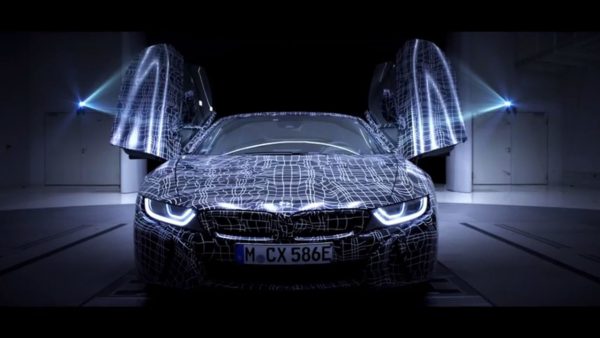 The only part of the car that is not wearing any disguise is the roof, which looks like it is made of fabric, but we are not entirely sure. Very similar prototypes have been caught by our spy photographers in recent months, so the teaser is not actually showing something that we have not seen before, unless we’re missing something.

Compared to the coupe, the i8 Roadster will boast two humps behind the rear seats as seen on the i8 Vision Future Interaction concept. Overall, the design will be in line with its fixed roof counterpart.

Logic tells us the model will be based on the upcoming facelift for the coupe, so expect the electrified convertible to feature the regular i8’s rumoured power boost from day one.

Besides packing more hybrid punch, the updated i8 is allegedly going to feature a bigger battery pack with more juice for a prolonged electric range.

While sales are slated to commence in 2018, we won’t be too surprised if BMW will reveal the i8 Roadster in the months to come.