Less than a year after unveiling the new 3 Series sedan, BMW has now officially taken the wraps off of the Touring estate set to go on sale in Europe on September 28th. Now into its sixth generation with a claimed 1.7-million units having been sold since 1987 with a half-a-million of those being attributed to the outgoing F30, the new G20 Touring measures 76 mm longer than its predecessor at 4 709 mm in overall length, with a wheelbase extended by 41 mm to 2 851 mm, a 16 mm gain in width to 1 827 mm and a eight millimetre height increase to 1 470 mm.

According to BMW, the uptakes in the various dimensions as a result of the Touring being based on the same CLAR platform as other BMW models, has netted a 112 mm gain in boot width with the loading aperture being 30 mm and the loading sill 616 mm lower than before.

Optionally available with an electric bootlid, cargo capacity has been improved upon by five-litres to 500-litres with the 40/20/40 electric split rear bench up, although titling this forward results in 1 510-litres, a mere 10-litres more than the F30. A new addition is that the rear window can be opened instead of the actual lid if so desired.

Aside from its extended rump, the Touring is otherwise aesthetically similar to the sedan with models set to be sold on the Old Continent offering a choice of four trim levels with their own assortment of exterior additions; Advantage, Luxury Line, Sport Line and M Sport. 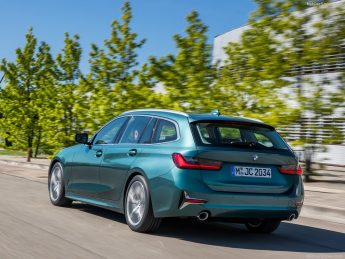 The same applies to the interior where each of the mentioned exterior packs comes with a bespoke range of trim pieces inside, while on the tech front, the BMW Live Cockpit Professional brings the all-digital instrument cluster, the 10.25-inch iDrive infotainment system with 7.0 operating system and a clutch of safety and driver assistance systems mirroring those of the sedan.

Up front, European buyers will have a choice of three turbocharged petrol engines and three turbodiesels, as well as plug-in hybrid with xDrive all-wheel-drive available on some.

Whereas the 320i will only be offered in rear-wheel-drive and sprint from 0-100 km/h in 7.6 seconds, the 330i will have the aforementioned xDrive option with the benchmark sprint taking 0.1 second less than the rear-wheel drive at 5.8 seconds. 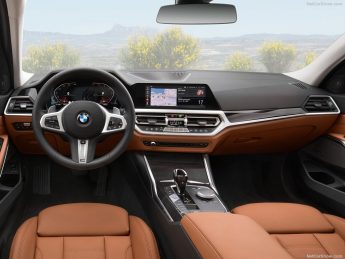 As indicated by its name, the M340i will have xDrive as standard and reach 100 km/h from zero in 4.5 seconds, before hitting the electronic buffers at 250 km/h. Regardless of engine, all of the petrol motors will be mated to the eight-speed Steptronic gearbox with the sport-focused setup behind standard on the M340i.

Powering-up the diesel line-up, both the 318d and 320d will make use of a 2.0-litre mill putting out 110kW/320Nm and 140kW/400Nm, with both having the option of a six-speed manual gearbox or the eight-speed Steptronic. An option however on the 320d will be the xDrive system albeit only with the automatic.

The next-step 330d xDrive comes powered by a 3.0-litre straight-six outputting 195kW/580Nm, and, like its name points out, has both xDrive and the eight-speed ‘box as standard with 0-100 km/h taking 5.4 seconds.

Heading for Europe in a choice of eleven colours with new additions being Blue Ridge Mountain Metallic and, from the BMW Individual selection, Brilliant White Metallic, Frozen Dark Grey Metallic, Citrine Black Metallic, Dravite Grey Metallic, Oxide Grey Metallic and Tanzanite Blue Metallic, the 3 Series Touring will however be a no-no for South Africa due to the lack of estate popularity.