One of the models forming part of the Boulogne-Billancourt automaker’s Drive the Future (2017-2022) plan, the Captur bows with styling derived from the Clio and on the same CMF-B platform with dimensions of 4 822 mm in overall length, a wheelbase of 2 693 mm, height of 1 566 mm and width of 1 797 mm. Boot space is therefore rated at 536-litres and rear legroom improved by 17 cm.

With the various figures translating to a gain in length, width and height compared to the previous model, the new Captur, despite its familiar silhouette, ushers-in the standard fitment of Renault’s C-shaped LED headlights across the range with the new front facia standing in-line with the rear that boasts redesigned full-LED light clusters that now cuts into the bootlid. 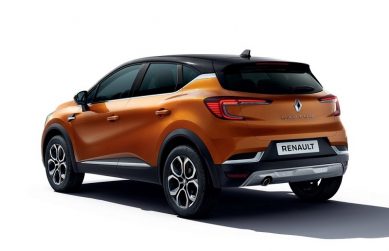 Inside, the Captur’s interior, itself available with a choice of seven colours, mirrors that of the Clio with pride of place going to the new Easy Link touchscreen infotainment system offered in three sizes; seven-inches with or without satellite navigation, and the top-spec 9.3-inch with all benefitting from Apple CarPlay, Android Auto, Bluetooth and dual USB ports.

Continuing with its Clio roots, the Captur’s range of engine are carried over and consists of the new 1.0-litre turbocharged three-cylinder petrol producing 74kW/160Nm, and the 1.3-litre turbocharged four-cylinder co-developed with Daimler in two states of tune; 96kW/240Nm and 115kW/270Nm. Transmission-wise, a five-speed manual is standard on the three-pot with a six-speed manual or seven-speed EDC being fitted on the mid-range 1.3. The top-spec petrol is however only available with the EDC.

Upgraded to Blue dCi status, the long-serving 1.5-litre motor serves as the sole oil burner and also in two outputs; 70kW/240Nm and 85kW/260Nm. While the six-speed manual is standard fare on both, the seven-speed EDC is optional only on the flagship diesel.

Arriving later, the new E-Tech motor pairs a normally aspirated 1.6-litre petrol with a 9.8 kWh battery pack that allows for an all-electric range of 65 km, and ability to travel without the petrol for up to 45 km at speeds up to 135 km/h. No further drivetrain details were divulged.

As one of Renault South Africa’s biggest seller, expect the Captur to make its local market debut sometime next year.