Honda has provided a possible glimpse of what South Africans could expect from the CR-V by unveiling the facelift model due out in North America at the end of this year.

With the obvious exception of being left-hand-drive, the North American CR-V’s main difference from the model sold locally was the orange indicator clusters, though as part of the mid-life revision, it now comes with a new grille, a restyled bumper with a chrome bar, blacked-out taillight clusters and a choice of three new colours; Sonic Grey Pearl, Aegean Blue Metallic and Radiant Red Metallic.

New to the line-up is the CR-V Hybrid, whose bespoke exterior touches consist of blue badging on the grille, bar-type LED headlights and a slightly revised rear bumper with dual chrome exhaust outlets. 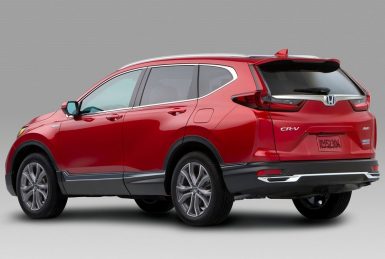 Inside, the changes are even more subtle with the Hybrid receiving a model specific instrument cluster, while the entire range benefits from a redesigned centre console housing a wireless smartphone charger on the top-spec Touring model.

In North America, the CR-V will come in four trim levels; LX, EX, EX-L and Touring, the former pair riding on 18-inch alloy wheels and the latter on 19-inch alloys, with the biggest change being the mentioned inclusion of the Hybrid. 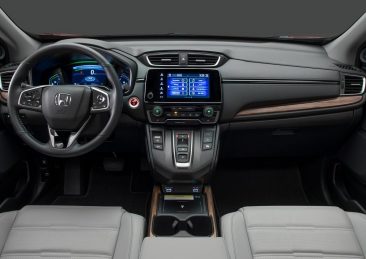 Already available in some European markets, the Hybrid combines a normally aspirated 2.0-litre petrol engine with a two-motor electrical layout that offers up a combined output of 158 kW fed to all four wheels via a button operated CVT. Bespoke to the Hybrid are three driving modes; EV, Econ and Sport.

Its inclusion has come at a price with the previous range topping 137 kW 2.4-litre motor having been dropped completely, leaving the 140 kW 1.5-litre turbocharged engine as the sole internal combustion option available. Like on the Hybrid, both these motors are teamed to a CVT but with the option of front-or-all-four-wheel-drive.

As before, production takes place at the Greensburg Plant in Indiana that also manufactures the Civic, with pricing set to be announced later. At present, it remains to be seen whether the updates will be applied to local models, but if indeed so, don’t expect the Hybrid to feature.