Helped-out by an electric supercharger in addition to the 48-volt generator, the Ghibli Hybrid produces 243kW/450Nm. Often overlooked in its segment, Maserati has unveiled its first ever hybrid in the shape of the Ghibli Hybrid. Touted by the Trident band “as one of [it’s] most ambitious projects” so far, the Hybrid subtly differentiates itself from its petrol and diesel siblings by receiving blue brake calipers and surrounds for the three fender vents, a blue Trident on the C-pillar and inside, blue accents as well as blue embroidery work on the seats.

In addition, touches such as a new grille and redesigned taillight clusters will be offered on non-hybrid models as part of the update. Also set to be carried over to other models are the new graphics for the touchscreen infotainment system, which now measures 10.1-inch instead of 8.4-inches. A new instrument cluster with updated graphics rounds the changes off. 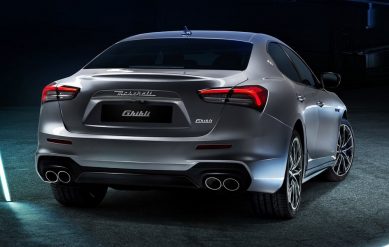 The most radical departure is of course the engine, which not only features electrification, but displaces 2.0-litres and with four-cylinders. Helped-out by an electric supercharger, dubbed e-Booster, in addition to the 48-volt generator, the Ghibli Hybrid produces 243kW/450Nm and will go from 0-100 km/h in 5.7 seconds before topping out at 250 km/h.

Tipping the scales at 80 kg less than the equivalent V6 Diesel, the electric motor is positioned at the rear for improved weight distribution, with Maserati stating that “occupants will still revel in the unmistakable sound that characterises all Maserati models, thanks to the optimised exhaust”. 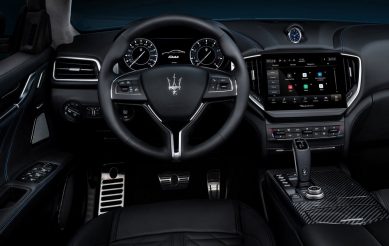 No details regarding price was revealed, with the same being true of South African market availability.