BMW South Africa has confirmed availability from the first quarter of next year.

After numerous online sightings plus a relatively detailed teaser campaign two months ago, BMW officially revealed the all-new 2 Series Coupe overnight ahead of its public showing at the Goodwood Festival of Speed in the United Kingdom this weekend.

Shown in standard and M240i xDrive guises, the 2 Series, unlike the Gran Coupe, remains rear-wheel-drive with all-wheel-drive, as indicated by its name, being standard on the latter that tops the range once again until the arrival of the M2 next year.

Paying tribute to an icon

Boasting a 1 575 mm front track and made mostly out of aluminium and hotstamped steel to keep weight down without losing out on rigidity or safety, the 2 Series features a 390-litre boot, 20-litres more than the before, as well as a 40/20/40 split rear seat and according to BMW, a 50/50 weight distribution.

Sporting an almost evolutionary design as the same basic silhouette has been carried over from the previous Two, the newcomer forgoes the controversial kidney grille of the 4 Series and M3/M4 for a still wide but more flatter design with the headlights being model bespoke and available with either standard full-LEDs or optional adaptive LED diodes.

Claimed to pay homage to the iconic 2002 with certain elements seemingly also derived from the 2002 Homage concept from five years ago, the 2 Series will ride on 17, 18 or 19-inch alloy wheels with the latter being standard on the M240i xDrive.

In addition, the range-topper, apart from the M exterior attire, features as standard the adaptive M suspension, upgraded M Sport brakes with a four-piston red or blue painted caliper setup at the front and single at the rear, recalibrated electric power steering and the M Sport differential.

Inside, the interior mirrors the 4 Series in layout and design with the standard setup comprising an 8.8-inch iDrive infotainment system and 5.1-inch instrument cluster display, or the optional BMW Live Cockpit Professional made-up of the 10.25-inch iDrive display and the 12.3-inch digital instrument cluster.

Equipped with over-the-air updates, both iDrive units come with the 7.0 operating system as well as Apple CarPlay and in the case of the latter, standard embedded satellite navigation.

Also available from the options list is a new Heads-Up Display on models fitted with Active Cruise Control, tri-zone climate control, a new glass sunroof 80 mm longer than before and a choice of three sound systems; the standard six-speaker with 100-watts, an optional ten-speaker with 205-watts that is standard on the M240i or the top-level 16-speaker Harman Kardon that delivers 464-watts in addition to featuring a seven-channel amplifier.

Power of four and six

Providing propulsion, all models bar the M240i are powered by 2.0-litre four-cylinder turbocharged engines with drive, as mentioned, going to the rear wheels only. In a further departure from the old 2 Series, the six-speed manual gearbox has dropped entirely for the eight-speed Steptronic that comes with the optional sports ratios, a setup that is standard on the M240i.

Kicking the range off, the 220i outputs 135kW/300Nm while the step up 230i that joins the range next year delivers 180kW/400Nm. Top speed is pegged at 236 km/h for the former with the 0-100 km/h dash taking 7.5 seconds, while the latter will dispatch the benchmark sprint in around six seconds. No final figures relating to the top speed was divulged.

Capping the non-sporting models off, the 220d retains the same outputs as before, 140kW/400Nm, but benefits from a 48-volt mild-hybrid system that adds an additional eight kilowatts for short bursts. Top speed is pegged at 237 km/h with 0-100 km/h taking seven seconds.

At the range’s sharp-end, the M240i xDrive’s 3.0-litre six-cylinder has been tweaked to produce 285 kW with torque remaining unchanged at 500 Nm. Hooked to the mentioned sports transmission with drive going to all four corners, the 0-100 km/h sprint is dispatched with in 4.3 seconds with the top speed being limited to 250 km/h.

Going on sale in Europe and North America later this year, production will once again take place at the San Luis Potosí Plant in Mexico with BMW South Africa confirming availability from the first quarter of next year. Aside from the 230i, both the 220i, 220d with the mild-hybrid system and the M240i xDrive will be offered locally with pricing to be announced next year. 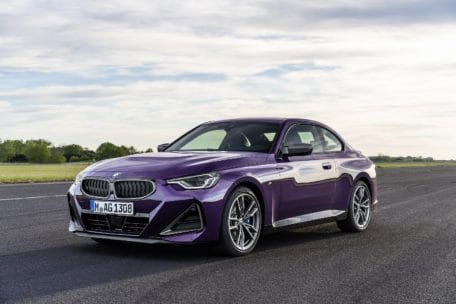 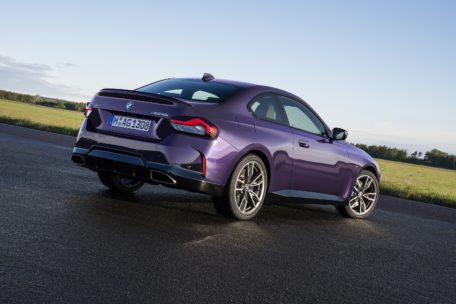