Replacement for the XUV 500 ushers in a revised turbodiesel engine and more standard spec. 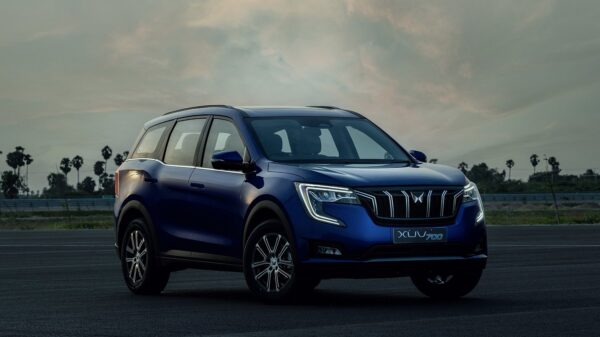 Styling a clear evolution over the XVU 500.

Amidst ever increasing sales, Mahindra South Africa has confirmed availability from later this of the year of the new XUV 700 that the replaces the aging XUV 500.

In announcing its first-quarter sales of figures of 3 306 vehicles, plus combined twelve-month sales of 8 525 units, of which 6 070 were Boleros and Scorpio Pik-Ups, the Indian auto giant stated that the XUV 700 will be supplemented at a later stage by the all-new Scorpio SUV currently undergoing testing.

“Mahindra has long been associated with great value and durable products. With (these) new models, we will also introduce a new level of luxury and technology for our customers and South African motorists in general,” Mahindra South Africa CEO Rajesh Gupta said.

While details surrounding the South African-spec XUV 700 are still unknown, the successor to the XUV 500, which was set to provide the foundation for the now-cancelled Ford C757 that had been touted as the likely replacement for the discontinued Kuga, is both longer and wider than the XUV 500 despite being an effective evolutionary model.

Its name is pronounced “seven-double-oh” and not “seven-hundred”, the XUV 700 comes in two models; MX and AX, though chances are only the latter will be offered in South Africa without the suffix in its official designation.

Underneath the bonnet, the XUV 700 derives motivation from either a 2.0-litre turbocharged mStallion petrol engine outputting 147kW/380Nm, or a reworked 2.2 mHawk turbodiesel that punches out 135kW/420Nm when paired to the six-speed manual gearbox or 450 Nm when mated to the six-speed automatic.

While the petrol, which is mated to the manual ‘box as standard, is unlikely to be sold locally, both derivatives of the oil-burner are a dead certain with drive either going to the front or all wheels.

Seating is expected to be similar to the Indian model with five being standard and seven either optional or included on higher-end derivatives.

Unique to the diesel are four driving modes Mahindra claims “takes the driving experience to the next level, namely Zip, Zap, Zoom and Custom.