I am sure you will pull all your hair out, one hair at a time, and do it slowly and painfully, if you hear me mention an SUV again. It’s a solid, high performance, practical sedan in world that has gone SUV crazy. “The AMG C-Class is our best-selling model series and therefore a key cornerstone of our company’s success. But when it comes to the pinnacle of C-Class performance, there is one model in particular that stands out: the C63s,” says Selvin Govender, Marketing Director of Mercedes-Benz Cars.

“The Mercedes-AMG C 63 S is more striking and expressive than ever; not just due to its new front design featuring AMG-specific radiator grille, but also on account of the re-designed rear which contributes to the athletic design of the vehicle. It’s also a rear-wheel drive icon and with its AMG-specific chassis, the new Mercedes-AMG C63 S is an exceptional performance vehicle.”

As you can see, the C-Class model range has always been Mercedes-Benz’s bread and butter model around the world. And I know when I say that, many may think mundane everyday type transport and a part of this is true.

A C-Class Sedan is everyday transport. But you are completely delusional if you accuse the C63 S Sedan of being boring. The body changes are there as mentioned by Govender, as you can also see in the pictures. Subtle they are, but there is no mistaking this sedan for anything but a high-performance AMG car. Some will criticise this aspect of the updated car, but that’s exactly what it is, a midlife cycle update and not an all new model. 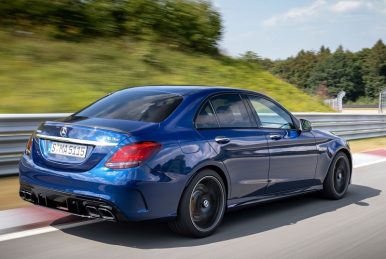 The tried and tested 375kW/700Nm AMG 4.0-litre V8 bi-turbo engine does duty once again. And there was no need to tweak this area of the car as this engine is a gem in terms of power and torque delivery.

One of the new features though in the C63 S is the AMG Speedshift MCT 9G double clutch transmission that was previously a seven-speed transmission. Not only does this box allow for lightning fast gear changes on the move when required, but it allows for a proper launch control function that facilitates the putting of all that power through the 19-inch tyres to the tar on your behalf.

Think you are better than a computer? Try launching this car with the traction control system switched off. Dumping 700Nm of torque through two hand sized pieces of rubber at the rear is great fun for showing off and infuriating all of suburbia, as you go past them sideways in a blur of noise and black tyre smoke. But it won’t make for quick acceleration times.

I have attached a little acceleration chart listing Alfa’s Giulia QV, BMW’s M3 and Audi’s RS5 for quick reference. But as you can see, this rear-wheel driven C 63 S Sedan hammers the competition from the word go. 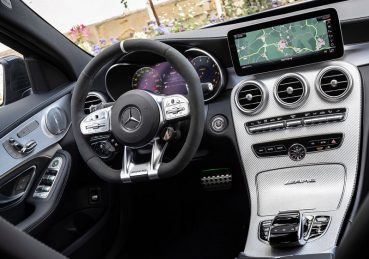 Audi’s quattro AWD RS5 is the only car that runs with the AMG to 100km/h, while both the rear wheel driven QV and M3 are slower off the line. And at 200km/h, the Audi is history with the Alfa and BMW trying to hang on in there. At 1km there is clear distance between the Merc and the rest, and again except for the RS5, whose electronic speed limiter is set lower, and the QV that didn’t hit its claimed limiter, the other two charge towards a limited 290 odd km/h.

This puts this family type sedan in some serious fast car company and I wouldn’t underestimate it if I was you on one of those popular Supercar Sunday morning breakfast runs. If you do, you could find yourself eating alone at Wimpy and not at Café de Big Money. But of course, straight line speed is only one aspect of being a complete all-round performance saloon.

What about handling and everyday comfort? I always say that if you are going to spend R1.5-million on a car, then it needs to excite you each time you open the garage and look at it, each time when you prod it into life and most importantly, it must excite you when you drive it, and by drive it, I mean drive it fast. 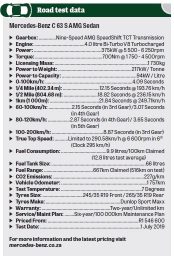 This is where the AMG wizardry really comes to the fore. The new, integrated dynamic handling control system AMG Dynamics can be swapped between four modes, Basic, Advanced Pro and Master. And this complemented by a multiple mode AMG Traction Control system that enables all sorts of levels of traction or slip to be engaged in further differing modes.

Should none of these multitude of settings be good enough for you, you can opt for the fully configurable Individual setting and do exactly what the name says, make it suited to you and only you. Oh, and you have a proper, don’t shift up or shift down unless told to, Manual mode. And if that is not enough, I told you this is AMG wizardry, the electronic control of the power and the rear diff has a further nine stages of traction control.

Almost all of what you need in terms of dynamically controlling your car is conveniently accessed via a controller on the new AMG performance steering wheel. And you have multiple AMG telemetry screens to help you analyse this data being pushed out by the car. Did I use this while driving? No. And you probably won’t either. But I did study it after testing and found it quite interesting.

This all might seem a little complicated or too much for the average driver, but this is not an average driver’s car and as much as the car will flatter you as a driver, you will still need some level of skill if you want to venture past say 70% of this car’s ability, and still bring it home in one piece.

Offering the looks, the sound, the practicality and now the unrivalled dynamic variability, the C63 S is unbeatable right now. You can be politically incorrect and enjoy your fast car when you want and then you can also take your mother-in-law to breakfast in comfort and mean it when you tell your wife it wasn’t you that scared her like that. This story is all about speed and ability, as it should be with a Mercedes-AMG car.