The crowd actually almost crawled over the adjacent car to get a glimpse of the Supra. It is near impossible to say anything about Toyota’s new Supra without reference to a BMW Z4. So let’s first explain how the siamese twins were conceived before cutting the Supra loose.

The Supra is the product of a collaboration between Toyota and BMW. It started something like this: Germans plan a replacement for the E89 Z4 after production stopped in 2016. The Japanese looked to revive the sports car of which the fourth generation was discontinued in 2002.

So the two poles of the world’s automotive market throw their sauerkraut and sake in a bowl and blend it. The result is a shared platform with two very diverse personalities. no matter what the Twitterati want you to believe. Supra chief engineer Tetsuya Tada explained the logic behind differentiating the two cars: ‘’Toyota wants to make Supra a pure sports car and BMW wants to make Z4 a luxury sports car, each aiming for the best of other.”

So Toyota Gazoo Racing was instrumental in honing the new sports car’s performance, working extensively on the famous Nuerburgring Nordschleife and surrounding roads in Germany to achieve the most agile, stable and rewarding handling possible. And judging by its pedigree, when Toyota’s global motorsports programme gets involved it doesn’t beat around the bush.

“In making Supra, I insisted on visiting enthusiasts’ clubs around the world to talk to owners of previous models,” added Tada. “I asked them what they thought the minimum requirements should be and the response was always ‘a straight-six turbo and front engine/rear-wheel drive configuration. 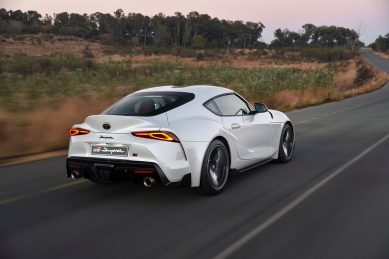 “It was pretty clear and I had more or less anticipated this. The key point was to keep that combination intact. The new Supra is not simply a revival. Only those core engine and rear-wheel drive elements have been carried over.

“As the name Supra suggests, I was determined to deliver a ‘supreme fun-to-drive’ car that could only be made in the modern era.’’ And Tada hit the nail on the head in what he set out to achieve. And in doing so Toyota also managed to pay homage to the fourth generation Supra through the muscular rear wings and the arc of the integrated spoiler as well as the landmark 2000GT from the 1960s with the long bonnet, compact body and double bubble-roof.

To top off the exterior package the GR Supra is fitted with lightweight, highly-rigid 19-inch forged alloy wheels with alternating black and polished slim spokes. Taking nothing away from the Z4 as it is a premium sports car in its own right, the Supra just oozes with X-factor that inspires instant respect and awe wherever you take it.

To prove my point, when the GR Supra was delivered to our offices, it was parked next to another test car from a manufacturer I’m not going to disclose. I’ll confirm that the other car was a German brand – not a Z4 though – and about half a million rand to the good. It was even a cabriolet. But which car attracted one of the largest pack of selfie-mad onlookers to date? The Supra. The crowd actually almost crawled over the adjacent car to get a glimpse of the Supra.

When one spectator finally realised the other car wasn’t too shabby at all and asked the others why they were more interested in the Japanese ride than the German one, the answer was unanimous: “Because it’s a Supra.” And with that I rest my case on where the similarities start and stop. 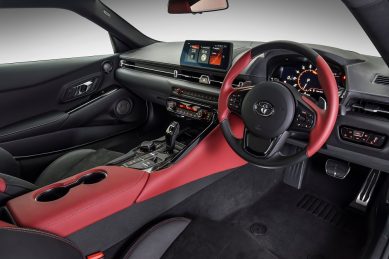 So, as Tada stated, the Supra GR is powered by a 3.0-litre straight-six petrol engine with a single twin-scroll turbocharger. It produces 250kW and 500Nm of torque which is sent to the rear wheels via an eight-speed automatic gearbox. As can be expected in a car like this, it comes with shift paddles at the back of the steering wheel if you want to play going about your business manually.

Road Test editor Mark Jones put our test unit through its paces at Gerotek and clocked an impressive time of 4.33sec from 0 to 100km/h. I took it for a scenic-cum-hooligan outing around Muldersdrift, but I was still itching to experience the Supra’s full potential, which was never going to happen with me in the driver’s seat. So what better opportunity than to be the passenger around the Kyalami Grand Prix Circuit during the recent Festival of Motoring?

You only truly appreciate what a car is capable of when closely observing it in the hands of a true professional. And all I can say is wow. The turning, the braking, the acceleration, the way the suspension reacts through the corners and its steady footing at high speeds strikes a perfect balance.

At its exhibition stand in the Kyalami pit lane during the Festival of Motoring, Toyota had a big screen replaying a video of Fernando Alonso driving a Supra around the Fuji International Raceway for the first time. It takes a lot to get a man excited who has started over 300 Formula 1 races and competed in countless racing championships around the world for the best part of the last two decades.

Yes, I know Toyota pays him enough to not say a bad word about its cars, but his reaction behind the wheel of that Supra looked pretty real to me. In singing the Supra’s praises after spending time on the track, he said: “I think this car strikes the perfect combination between a sports car and an everyday car.”

The idea to leave an open hole between the front seats connecting the cockpit to the boot, which makes loading your gold clubs possible, justifies the everyday part of his statement. But once you stick your rear on the racing-inspired driver’s seat you are undoubtably in a sports car. 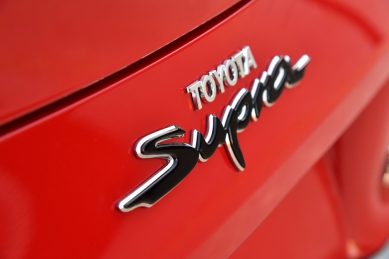 The 8.8-inch high-definition driver’s instrument display with 3D-effect tachometer and shift indicator positioned in the centre with a digital speed read-out to the left and infotainment and navigation information to the right gets the blood pumping just by looking at it.

When you are ready to rumble, you have the choice of two Adaptive Variable Suspension modes – Normal and Sport – to suit your mood or the driving conditions. Normal mode strikes a balance between vehicle stability and ride comfort, enabling a sporty drive without sacrificing comfort. Sport mode delivers a flat vehicle posture, reduced body roll and a more agile steering response.

In addition, the car is equipped with a Blind Spot Monitor Rear Cross-Traffic Alert, Rear-end Collision Alert and Intelligent parking sensors with automatic braking. With a car that’s so much fun, so fast and yet so safe, Alonso’s parting message summed it up perfectly. “If you want this car, don’t overthink it. Just go and get one.” 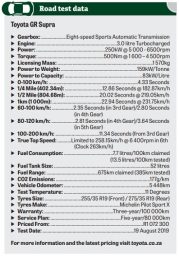