All manufacturers have some kind of payoff line that they feel encapsulates their brand. 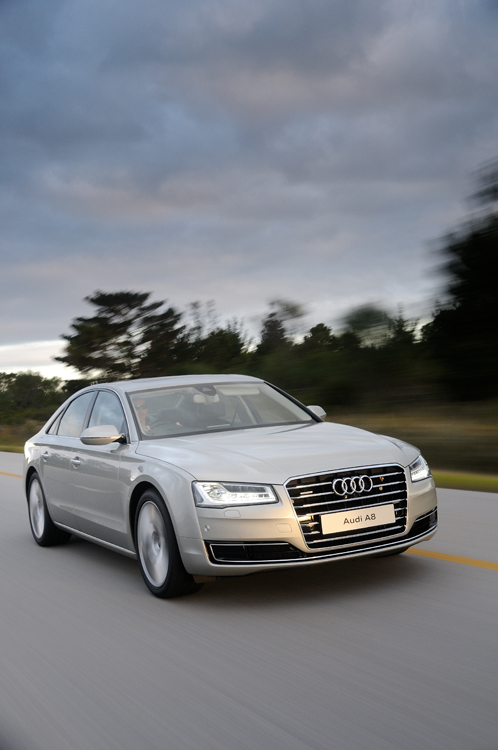 Usually it is just marketing mumbo-jumbo which is of more use in keeping the company focused internally than it is of any use to a consumer.

Occasionally however it is actually meaningful. In the case of Audi the catch phrase is “Vorsprung durch Technik” which essentially means progress or advancement through technology. The refreshed Audi A8 range showcases a really clever technical innovation they call Matrix LED headlight technology.

Standard on the upcoming A8 W12 6.3 L model and an option on the other A8s, it will however almost certainly find its way into less expensive Audi’s over time. With these headlights, the high-beam comprises 25 individual light-emitting diodes per unit that can be switched on and off or dimmed individually depending on the situation. This enables the headlight system to react extremely precisely to other vehicles while always brightly lighting up the road.

This in itself is pretty impressive as it allows drivers to simply put the headlights on high beam and relax. The really clever bit is that these units also act as intelligent cornering lights, with no moving parts. This is possible because the 25 lights are grouped in front of a series of reflectors. A combination of dimming and switching off indvidual LEDs according to the reflector position allows light to be directed through corners. The lighting system in the A8 uses predictive route data from the navigation system to adjust the distribution of light in response to the current driving situation. In combination with the standard Navigation plus with MMI touch, the system recognises route data contained in the navigation system, such as curves and road classifications.

LEDs have also been used to create dynamic turn signals. The LEDs light up sequentially in a row from the inside of the car to the outside in the direction of turn. Personally I think its a bit cheesy, but it leaves other road users in doubt as to the A8’s intentions.

On the engine front Audi will offer a full diesel model range for the Audi A8 in South Africa. The 3.0 TDI quattro and 4.2 TDI quattro will be available in both normal and long-wheelbase variants.

Next month the all new Audi S8 and the A8 W12 6.3 long-wheelbase model will be launched. The Audi A8 Security will be offered later this year in both 4.0T FSI and W12 6.3 versions.

One great strength of the sedan is its lightweight construction. The body is made almost entirely of aluminium; an Audi Space Frame (ASF) design, it weighs just 231 kilograms. The length (5.14 metres), wheelbase (2.99 metres), width (1.95 metres) and height (1.46 metres) remain unchanged from the outgoing model. The A8 L gains an additional 13 centimetres in both length and wheelbase. Additional noise damping measures reduce the already low interior noise level even further.

Audi offers the A8 in the South African market with two petrol and four diesel engines. These are the highly efficient 3.0 TDI quattro clean diesel with 190 kW and 580 Nm of torque, and the 4.2 TDI quattro clean diesel, which produces 283 kW and 850 Nm. Both these engines are available on the normal and long-wheelbase models and require ultra-low sulphur diesel. Audi is the only manufacturer to offer a V8 diesel engine in the South African D-segment.

Only available in normal wheelbase will be the Audi S8 of which its performance figures remain unchanged from the previous model. The 382 kW engine produces 650 Nm of torque with an acceleration time of 4.2 seconds. Paired with quattro all-wheel drive, its sonorous 4.0 TFSI has an average fuel consumption of 10.1 litres per 100 kilometres, corresponding to 235 grams CO2 per kilometre. The Cylinder on Demand system, which deactivates four of the eight cylinders under partial load, plays a key role in the efficiency of this model.

Audi connect incuding car phone is available as standard across the range.