The veteran is up to fourth but it's the privately-funded duo of Hennie de Klerk and Gerhard Schutte that rocket up the standings. 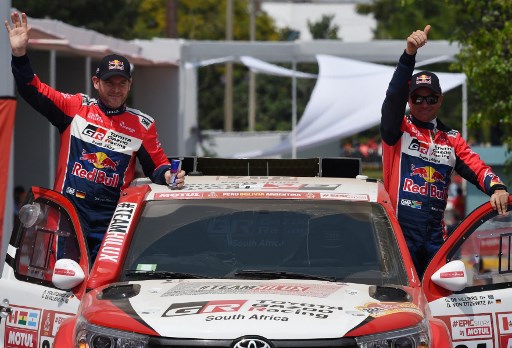 Toyota's driver Giniel De Villiers (R) of South Africa and his co-driver Dirk Von Zitzewitz of Germany wave from the podium, during the start of the 2018 Dakar Rally, ahead of the rally's Lima-Pisco Stage 1, in Lima on January 6, 2018. The 40th edition of the Dakar Rally will take competitors through Peru, Bolivia and Argentina until January 20. / AFP PHOTO / CRIS BOURONCLE

Giniel de Villiers took fourth place on stage two of the Dakar Rally on Sunday, and while the South African driver would have been pleased after climbing to third in the general classification, he was left with some work to do to catch the early leaders.

Frenchman Cyril Despres was quickest on the 267km looped special stage in Peru, opening a 27-second gap over countryman and Peugeot teammate Stephane Peterhansel at the top of the overall standings.

Though De Villiers managed to climb three places in the rankings, moving into a podium position, he was more than five minutes behind Despres.

His Toyota Gazoo Racing SA teammate Nasser Al-Attiyah of Qatar, who had led overnight, slipped back to fifth position but he too remained in contention for the local outfit.

Further back in the field, Hennie de Klerk and co-driver Gerhard Schutte (Volkswagen) delivered a solid performance, with the SA duo rocketing 27 spots up the car rankings to 32nd overall.

David Thomas retained his place as the top SA bike rider on his Husqvarna, though he tumbled 32 places in the overall standings, settling in 61st position.

He was more than an hour behind Honda rider Joan Barreda of Spain, who took the lead in the two-wheel division.

Monday’s third leg, which features a 296km special, will take the competitors from Pisco to San Juan de Marcona.