Only into its second generation having debuted three years ago, Nissan’s rival for the Toyota Tundra, Ram, Chevrolet Silverado and Ford F-150 boasts a new front facia dubbed Powerful Warrior, consisting out of LED headlights, a reworked grille in three designs, boomerang shaped daytime running LEDs similar to that of the revised Patrol, a redesigned front bumper, new fog lights and at the rear, updated lights and tailgate applique. 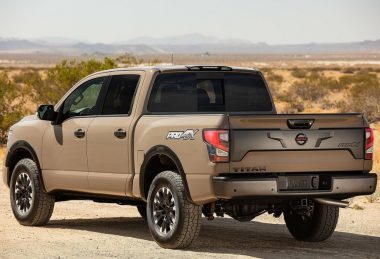 As well as benefitting from a LED light integrated into the bed, the Titan’s interior has been subtly tweaked to include upgraded materials, a dual pane panoramic sunroof on Crew Cab models and, depending on the trim level, three infotainment systems; a seven, eight or nine-inch display with the latter boasting Apple CarPlay and Android Auto as well as over-the-air updates. In addition, the latter comes with an internal Wi-Fi router supporting up to six devices, while a 12-speaker, 485-watt Fender Premium Sound System with a nine channel amplifier can also be specified.

On four-wheel-drive models, the Titan gains a so-called Off Road Gauge with pitch, angle and rollover angle gauge, as well as an electronic locking rear differential, a Brake Limited-Slip Differential, Hill Start Assist and, in the case of Pro-4X models, Hill Descent Control. In North America, the Titan will go on sale in a choice of five trim levels; S, SV, Pro-4X, SL and Platinum Reserve, all powered by the 5.6-litre Endurance V8 petrol that has been upgraded to produces 298kW/560Nm.

The same engine that powers the Patrol, the V8 churns out seven kilowatts and 26 Nm more than before, and comes paired to a brand-new nine-speed automatic gearbox in place of the old seven-speed unit. Gone however is the Cummins sourced 230kW/752Nm 5.0-litre turbodiesel V8 that sold in lower than expected numbers, with a further casualty being the single cab bodystyle, thus leaving the King Cab and the aforementioned Crew Cab.