Interior appears largely similar to that of the D-Max in layout and design. After close to a decade in production, Mazda has finally revealed the brand-new third generation BT-50. Easily one of the most highly awaited new pick-ups of recent times, the BT-50, as is well known by now, dispenses with former parent company Ford’s T6 platform used by the Ranger and Everest, in favour of the Drive Dynamics that underpins the Isuzu D-Max.

Developed entirely by Isuzu, the BT-50, which Hiroshima’s Executive Officer and Head of Design, Ikuo Maeda, described three years ago as being a challenge to style with the Kodo design language, takes after the CX-9 SUV when viewed from the front, while the rear is easily identifiable as having originated from its new sibling. 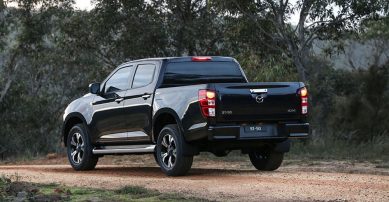 In spite of Mazda being mostly coy on details, the interior appears largely similar to that of the D-Max in layout and design, with the nine-inch touchscreen infotainment system taking pride of place on the facia. Like the Isuzu, the system features Apple CarPlay and Android Auto, plus satellite navigation. A 4.2-inch TFT instrument cluster display also comes standard.

For now, only a single engine is offered, the N-series truck derived 3.0 D-TEQ turbodiesel that pumps out 140kW/450Nm. Down seven kilowatts and 20 Nm on the previous range topping 3.2 TDCi five-cylinder, the oil-burner is paired to either a six-speed manual or six-speed automatic gearbox. 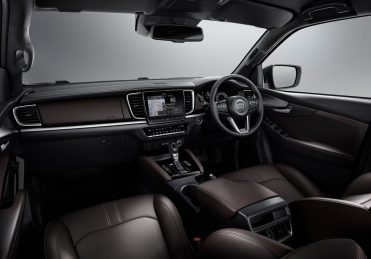 In spite of debuting with four-wheel-drive, the BT-50 will come as standard with two-wheel-drive, although it remains to be seen whether single and Freestyle Cab bodystyles would feature as before. Included though is a new rear diff-lock with the wading depth being rated at the same 800 mm as the Isuzu.

Shown in Australian-spec, where it will go on sale in the fourth quarter of this year, the BT-50 is only expected to arrive on local shores next year like the D-Max with an exact date still to be confirmed.