Motivation will come from the i30 N's 2.0-litre turbocharged four-pot but no final outputs have been confirmed. With full performance N variants of the facelift i30 and i20 already out and the facelift Kona to follow, Hyundai has released the first official teaser images of the new Elantra N approved markets will be receiving towards the end of this year.

Joining the mentioned models, as well as the Veloster and the i30 Fastback, the Elantra will therefore be the South Korean marque’s sixth N model with enhancement set to build on those of the N Line revealed three months ago.

Despite the depicted grey-and-red wrapping, the N’s visual changes difference are easily identifiable in the shape of deep lower air intake, N branded red brake calipers and N specific alloy wheels, wider side skirts and wheel arches, dual exhaust outlets under each side of the rear bumper and a more prominent rear wing attached to the bootlid. No interior images were divulged. 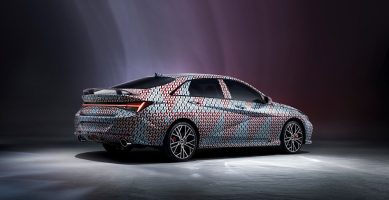 While still to be confirmed outright, the N will swap the N Line’s 1.6 T-GDI engine with 150kW/265Nm for the i30 N’s 2.0-litre turbo, although it remains to be seen whether it would produce the same 202kW/353Nm as the pre-facelift model or 206kW/392Nm that formed part of the updated version.

Either way, the amount of twist will be delivered to the front wheels via a six-speed manual gearbox or the new eight-speed automatic with N Grin Shift that unleashes the full amount of power and torque for 20 seconds. Whereas as the mentioned outputs refers to the flagship Performance model, expect some markets to also receive the ‘conventional’ N that punches out 184kW/353Nm.

As indicated, the Elantra N is poised to bow within the next few weeks before going on sale in select markets soon after, but don’t expect a South Africa market debut as the standard model, as well as the N Line, have already been ruled out due to the overall decline in sedan sales.