No mechanical changes to either model has taken place. Toyota has introduced several updates to the Quantum and HiAce ranges with the former taking the lion’s share.

In the case of the locally produced HiAce, which revived the iconic moniker in South Africa two years ago following the decision to brand the sixth generation model as the Quantum, the tweaks include a revised driver’s safety guard on the taxi market Ses’fikile aimed at reducing Covid-19 transmission between the driver and passengers. Left unchanged is the 14-seat GL bus introduced with the name change.

As before, a choice of two engines are provided; a 2.7-litre petrol outputting 111kW/241Nm and the familiar 2.5 D-4D rated at 75kW/260Nm. On all three derivatives, drive is routed to the rear wheels via a five-speed manual gearbox.

Revealed in May 2019 with South Africa being the only market where it carries the Quantum name, the changes to the internally designated H300 HiAce includes the scrapping of all non-air-conditioned panel van and crew cab models and standard availability of the latter fitted with the rear air-conditioning system. Also added is a reverse camera plus an auto-dimming rear-view mirror. 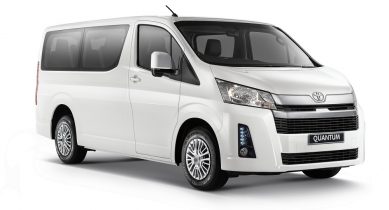 The latter’s specification items now also feature on the GL bus, which additionally swaps the 16-inch alloy styled wheels for full alloys of the same size. No updates or changes have however been made to the flagship Quantum VX.

As before, two variants of the 2.8 GD-6 turbodiesel engine is offered; a 130kW/420Nm unit in the panel van, crew cab and 11-seat GL and an 115kW/420Nm variant in the 14-seat GL and VX. Bar the latter, which comes as standard with a six-speed automatic ‘box, the rest of the line-up makes do with a six-speed manual. The standard warranty and service plan across the Quantum range mirrors that of the HiAce GL.