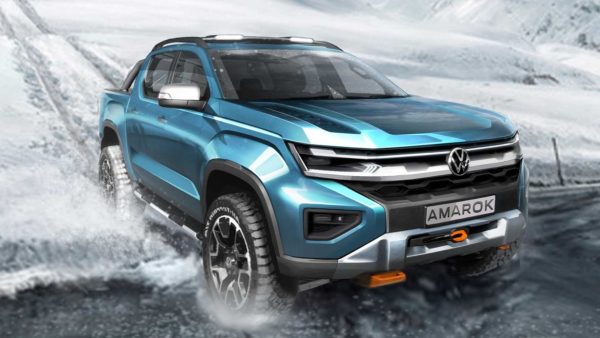 It’s been just more than a year since Volkswagen released the first teaser image of the all-new Amarok, but now the Wolfsburg giant has released a slightly updated follow-up depiction.

Minus the oversized alloy wheels and with proper door handles instead of nothing, the image also sees the inclusion of roof rails, a sports bar and a black centre section of the front bumper as opposed to the chrome finish of the original.

Aside from a slightly altered grille and indicators integrated into the seemingly production-ready mirrors, the sketch is otherwise identical in that it keeps the orange tow hooks, lights cutting into the grille, the concave shoulder line, silver skid plate and bonnet.

As is well known by now, the Amarok will ride on the same upgraded T7 platform as the next generation Ford Ranger and be built at the Blue Oval’s Silverton Plant outside Pretoria from next year following Dearborn’s record R15.8 billion investment into the facility last month.

While poised to swap its engines for the same 2.0-litre single and bi-turbodiesel units as the current Ranger, the Amarok will be different in look and feel instead of being a rebadged exercise.

“We know what our Amarok means to our customers and fans in Australia. And that’s the reason why we are really working hard to have a 100% Volkswagen, a true Volkswagen and not only a rebadged Ford. I want you to rest assured that this Amarok will be a real beast,” Volkswagen Commercial Vehicles head of design Albert-Johann Kirzinger, was quoted by Australia’s caradvice.com.au as saying last year.

Along with the use of the Ranger’s engines, which will extend to the 186kW/597Nm 3.0 Powerstroke V6 turbodiesel currently powering the F-150, the Amarok has also been tipped to receive an off-road focused model similar to the Ranger Raptor in the shape of the Amarok R.

Rumoured to produce 221 kW, an output which could be extracted from the Powerstroke or even the 2.7 EcoBoost V6 mulled for the petrol powered Raptor, the Amarok R, if approved, will come with revised suspension and all-terrain tyres, as well as an upgraded chassis and mechanicals to cope with strenuous off-road use.

With the all-new Ranger, known internally as P703, having already been spotted undergoing pre-production testing before its unveiling later this year, expect spy images of the Amarok and more official teasers, plus details to emerge in the coming weeks and months.