South Africa bound model will still produce 170 kW as opposed to the 225 kW made by the European model. 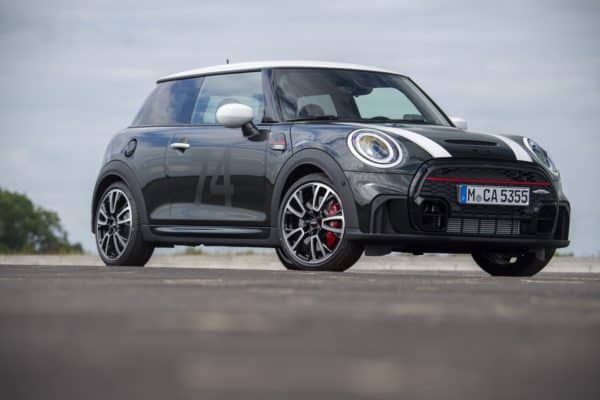 Changes from the standard JCW are evident

Having showcased the facelift John Cooper Works three months ago, Mini has introduced a special edition model to mark what would have been the 98th birthday of founding tuner John Cooper.

Equipped with selective damping, the Anniversary Edition will only be offered in a choice of three colours; the standard British Racing Green or alternatively Rebel Green as well as Midnight Black Metallic.

Inside, the cabin carries on from the conventional JCW, but receives a Nappa leather Cooper branded steering wheel, an anthracite roofliner, piano key black gloss inserts, sport seats trimmed in Dinamica/carbon black leather, a builder’s plaque above the door catch and a red ring on the door sills, steering wheel and dashboard with the latter also sporting the signatures of Cooper and his grandson Charlie, who races in the Mini Challenge in the UK.

Up front, the 2.0-litre turbocharged engine remains unchanged with outputs of 170kW/320Nm, which translates to a top speed of 246 km/h and 0-100 km/h in 6.1 seconds. As ever, a six-speed manual or eight-speed sport Steptronic gearbox delivers the amount of twist to the front wheels.

On sale in Europe, Mini has confirmed that only six of the 740 units will be coming to South Africa from the final quarter of this year. Pricing though has not be announced but expect a premium over the standard JCW’s R668 124 sticker with only the latter transmission being offered.