Only 85 will be made with power from the electrified Cosworth V12 still standing at 865 kW. 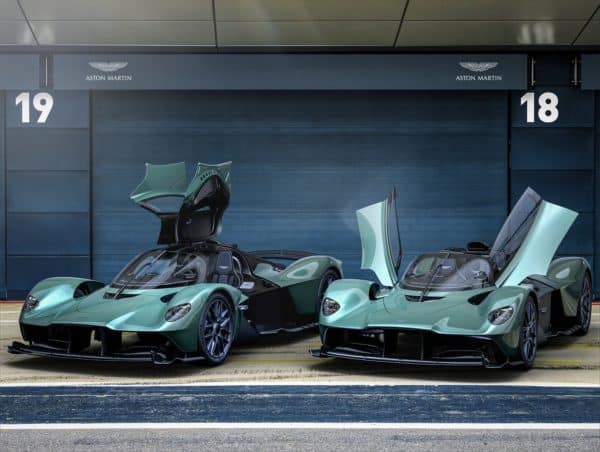 Swopping of the hard-top roof for a panel means the Valkyrie loses its gullwing doors and overall canopy design.

Having made its debut four years ago at the Geneva Motor Show as the production version of the AM-RB001 concept, Aston Martin officially unveiled the Spider version of the Valkyrie hypercar at the Monterey Car Week in California this past weekend.

Heading for production later this year with deliveries commencing in the second half of next year, the Spider retains the Le Mans Prototype-like look of the coupe, but with a number of changes relating to the removal of the roof.

Still made out of the same materials as the coupe, the Spider jettisons the roof for a removable carbon fibre panel that latches onto the top of the windscreen and the tub at the rear with added polycarbonate rear windows, while also swapping the canopy-like gullwing doors for hinged scissor items designed to fold forward.

Despite Aston Martin not revealing exact details of other modifications applied in order to compensate for the roof, the rest of the Spider remains unchanged with motivation coming from a Cosworth sourced normally aspirated 6.5-litre V12 paired to an electric motor for a total system output of 865W/900Nm. Top speed is rated at 350 km/h but falls to 330 km/h with the roof stowed away.

Set to be made in left-and-right-hand-drive, only 85 Valkyrie Spider will be made with pricing, unsurprisingly, not being disclosed.