As before, the Citan is a reskinned version of the Renault Kangoo, albeit with a different interior, appearance and revised chassis. 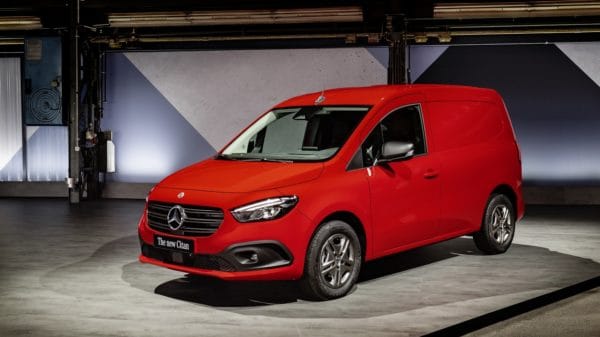 With alliance partner Renault having taken the covers off of the new Kangoo last year, Mercedes-Benz has revealed its interpretation in the form of the second-generation Citan.

Confirmed to spawn a more upmarket passenger model called the T-Class either later this year or next year, the Citan, which originally debuted in 2012 as part of a joint venture between Benz and the then Renault-Nissan Alliance, debuts as either a panel van or a five-seat people mover called the Tourer.

Riding on the same CMF-B platform as the Kangoo but with a restyled B-Class inspired face and a different rear facia, the Citan measures 4 498 mm in overall length with its wheelbase coming to 2 716 mm, height to 1 859 mm and width to 1 832 mm or 1 811 mm in the case of the Tourer.

Fitted as standard with a barn-style rear doors or optionally with a traditional tailgate, the Tourer also comes with the option of electric dual-sliding side doors with the panel van sporting conventional manual opening doors with or without windows as an option.

Able to haul between 318-782 kg with seating for two or three, the panel van boasts a loading volume of 2.9m3 with Mercedes-Benz claiming a towing capacity of 1.5 tonnes and ability to carry two full size Euro pallets behind each other.

Inside, Stuttgart has reworked the Kangoo’s interior by fitting the Citan with a bespoke dashboard housing not only different air vents, but also the freestanding optional seven-inch touchscreen MBUX infotainment system.

In addition, the Citan also gets a different steering wheel to that of the Kangoo, subtly revised centre console and Mercedes-Benz specific dials within the instrument cluster.

Depending on the specification, safety has gone a step-up with the inclusion of Active Distance Assist Distronic, Blind Spot Assist and Lane Keep Assist to name but a few. In a further departure from the Kangoo, Mercedes-Benz has also revised the Citan’s suspension, shocks and steering while also adjusting the stabiliser bars.

The Citan’s Kangoo genes are most prominent underneath the bonnet though where the venerable 1.5-litre K9K Renault made turbodiesel engine makes up of the bulk of the powertrain line-up, supplemented by the 1.3-litre turbo-petrol, three-pointed star had co-developed with the Renault-Nissan-Mitsubishi Alliance.

Standard across the range is a six-speed manual gearbox with a seven-speed dual-clutch optional on the 113 and 112 CDI. Also confirmed is an all-electric model called the eCitan that arrives next year with a reported single charge range of 285 km.

Going on sale in Europe from next month, the Citan will have a reported starting price of around €20 000 (R351 668) for the very entry level panel van, but as with the original, it is not expected to come to South Africa soon.