Six derivatives will be offered, the biggest since the Caddy's switch from a bakkie to panel van at the turn of the century. 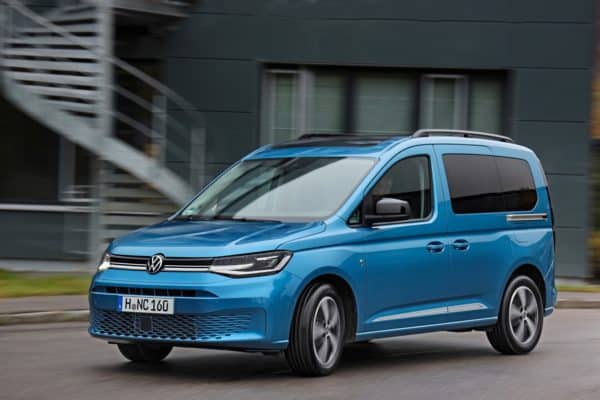 Having made its long awaited debut at last year’s Geneva Motor Show, Volkswagen South Africa has divulged select details of the all-new Caddy ahead of its market debut in November.

The first completely new model for almost 14 years, the Caddy, which now rides on the MQB platform, boasts styling from the not only the ID.3 but also the new T7 with its arrival also culminating in the largest-ever line-up for South Africa.

Currently accounting for 88% of all sales in the small van segment, the Caddy offers a choice of no less than six derivatives; the conventional people mover and long wheelbase Caddy Maxi, the workhorse Caddy Kombi and Kombi Maxi and the panel van Caddy Cargo as well as the long wheelbase Cargo Maxi. For now, no plans are in place to offer the crossover-inspired Pan Americana set to replace the Alltrack or the California camper.

In terms of seating arrangement, both the Caddy and Caddy Kombi offer seating for five with the respective Maxi derivatives able to seat seven. Both van models provide seating for two with Volkswagen claiming a load volume of 3.1m3 for the Caddy Cargo and 3.7m3 for Cargo Maxi.

Included on the Kombi models are black bumpers and steel wheels with options comprising of the mentioned alloy wheels and infotainment system, barn-style rear doors, cruise control, LED headlights with cornering function, a reverse camera and a multi-function steering wheel.

For the Cargo and Cargo Maxi, the specification list comprises a single sliding door on the former and a dual setup on the latter, halogen headlights plus daytime running diodes, barn-style rear doors that open 180 degrees, electric mirrors, ABS with EBD an Auto Hold function and space for two Euro pallets inside the Maxi.

In a departure from the European model, Volkswagen has opted, once again, not to introduce the 1.5 TSI Evo engine or even retain the ever popular 1.4 TSI with the same 110kW/250Nm outputs.

Instead, it has elected the drop the entry-level 1.0 TSI engine and offer only two options; the stalwart normally aspirated 81kW/152Nm 1.6-litre petrol and the long serving 2.0 TDI rated at 81kW/300Nm.

Both are connected, for now, to a six-speed manual gearbox only with the petrol offered on the Caddy, Caddy Kombi and Caddy Cargo, and the TDI across the range. Claimed fuel consumption is 7.3 L/100 km for the 1.6 and 5.5 L/100 km for the 2.0 TDI.