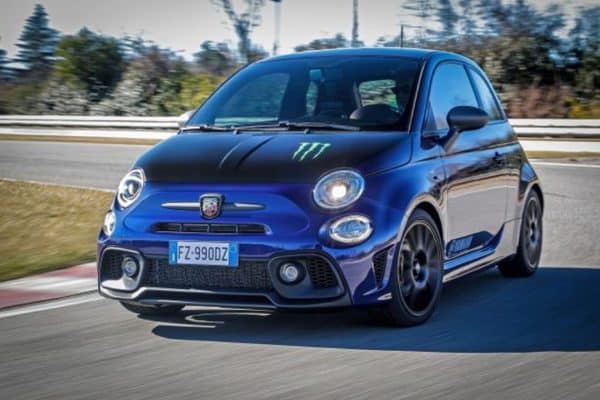 The limited edition Monster Energy Yamaha edition of which only 2 000 will be made.

Stellantis South Africa has completed its overhaul of the local Fiat line-up with the unveiling and pricing of the Abarth range.

Coming just under two months after the debut of the revised Fiat 500, which all Abarth models are of course based on, the range has been downsized from ten to four versions of 595 with the Turismo and Competizione remaining, while the base model falls away.

Stemming from 2007 like the ‘standard’ 500, Abarth’s series of comparatively minor updates include a seven-inch Uconnect touchscreen infotainment system, a new Alcantara covered instrument panel, 17-inch alloy wheels said to have been inspired by those of the Lancia Delta Integrale, and a new flat-bottom steering wheel.

As well as upgraded brakes, the previous Sport mode selector has been renamed Scorpion in-line with the Abarth logo, while new leather seats feature, along with a new gear lever and carbon fibre inlays.

Reserved for the Turismo though is a new diamond pattern seat option, with the Competizione receiving as LED headlights as standard, together with a new colour option, Rally Blue, Fiat says pays tribute to the so-called wreath livery carried by the works 131 Abarths in the World Rally Championship from 1980 to 1981.

More prominent are the changes applied to the Monster Energy Yamaha, which features the black-and-blue finish of last year’s YZR-M1 racer, a Monster Energy Yamaha MotoGP decal above the 595 badge, the green Monster ‘M’ claw logo on the bonnet, Yamaha decals at the base of the doors and a Tar Grey finish for the front air dam, door handles and rear diffuser.

Up front, the Abarth continues with the long serving 1.4 T-Jet turbocharged engine, albeit in three states of tune; 121kW/230Nm in the Turismo, 132kW/250Nm in the Competizione and 118kW/230Nm in the Monster Energy Yamaha. All are backed by a six-speed manual gearbox with the six-speed MTA being a request only option.