Production will be limited to 333 models with all having already been accounted for. 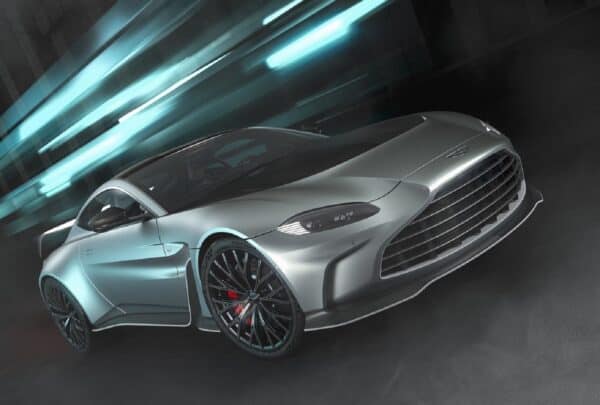 Final ever V12 Vantage also the most extreme Vantage ever made.

Having debuted the Spectre-inspired Vantage in 2017, Aston Martin has taken the covers off of the all-new V12 Vantage confirmed to be the swansong for the nameplate’s reliance on a bent-twelve power unit.

With its replacement, due in 2025, on track to be an electric model according to a report last year by motor1.com, the final V12 Vantage will be a limited edition model with Aston having already announced a sell-out of all 333 units destined for production.

Despite CEO and former AMG head, Tobias Moers, telling Britain’s Autocar last month that the V12 engine will live on for a bit longer prior to the electric switch, its application in the Vantage ends a 13 year streak that started with the previous 6.0-litre generation in 2009.

The most extreme V12 Vantage ever made, the newcomer employs the familiar AMG-sourced 5.2-litre twin-turbo V12 from the DBS, DB11 and DBX that produces 515kW/753Nm.

Positioned at a 60-degree angle, and paired to a ZF-sourced eight-speed Touchtronic transmission with a mechanical limited slip differential included, the V12 Vantage will get from 0-60 mph (96 km/h) in 3.4 seconds before topping out at exactly 200 mph or 322 km/h.

Adding to its performance credentials, the V12 is also lighter than the V8 with its 1 795 kg kerb mass being as a result of the restyled body relying on carbon fibre for the bonnet, bumpers, wings, door sills and rear wing.

Just as extensive, if not more, the V12’s chassis has been revised to include not only the mentioned differential, but also a new diffuser and adaptive dampers, new springs and anti-roll bars.

Providing stopping power, the carbon ceramic brakes utilise a six-piston caliper setup at the front and four at the rear, with the discs measuring 410 mm and 380 mm respectively. According to Aston, the application has resulted in a 23 kg weight save over the steel brakes the V8 comes standard with.

Inside, the overall design remains unchanged, but with unique touches applied by Gaydon’s Q by Aston Martin personalisation division.

These includes semi-aniline leather trimmed sport seats with a perforated and quilted pattern, carbon fibre shells for the seats themselves and standard carbon fibre inserts.

Due to enter production in the first quarter of the year, delivers of the V12 Vantage will officially commence in the second quarter but, as mentioned, without an expected backlog due to all units having been accounted for.