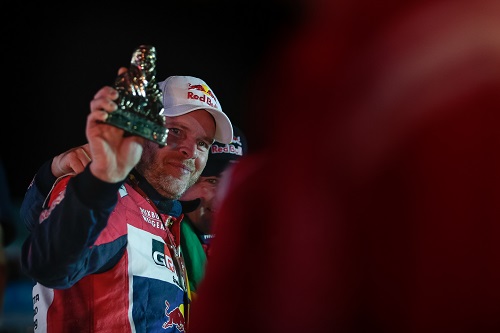 He covered the last 120km section of racing, held in Cordoba on Saturday, 40 seconds quicker than French driver Stephane Peterhansel.

While Spaniard Carlos Sainz settled for ninth place on the final leg, he did enough to retain top spot in the general classification, clinching victory for the Peugeot Total outfit.

It was the eighth time in his career that De Villiers reached the overall podium at the gruelling annual contest.

Further back in the field, Argentine driver Lucio Alvarez and South African navigator Rob Howie finished 10th for the Overdrive Toyota team, despite rolling their car early in the race.

The SA pairing of Hennie de Klerk and co-driver Gerhard Schutte finished 28th for South Racing in their Volkswagen.

Meanwhile, in the bike division, David Thomas was the best of the SA contingent, taking 36th position overall on his Husqvarna, though he was more than 12 hours off the pace of Austrian winner Matthias Walkner.