IN PICTURES: The making of a traditional Zulu shield

When you have gone past dried skins of anything from a mongoose and a monkey to a python at the Mai Mai muti market, at shop 169, Bhekani Mmelly Shangase works quietly on his own, crafting amahawu – Zulu cowhide shields.

Shangase has his thick reading glasses on. He cannot afford to make a mistake at this stage of his work – when the oval-shaped pieces of hide he has cut are ready to take on a new life…

He meticulously cuts vertical double slits in the hide. He pounds a special self-made tool with a wood mallet; checks it’s okay; then on to another one. When he’s done, he slides in decorative strips of hide of a different colour, called amagabelo, into the slits. 1/10
Traditional shield maker Mmelly Shangase works in his workshop as he measures a section of a cow hide shield as he prepares to add decorative elements. Picture: Michel Bega 2/10
The tools of the traditional shield maker are seen arranged on the floor of his workshop. He uses a variety of sharp knives, scissors, hammers, and homemade blades. The piece at the top left is one that belonged to Shangase's grandfather. Picture: Michel Bega 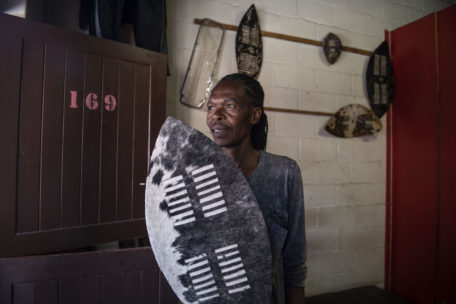 3/10
Shangase poses for a photograph with one of his cow hide shields. The various colours of different shields have different meanings and Shangase offers his clients a consultation which guides them through buying the correct shield depending its intended use. Picture: Michel Bega 4/10
Shangase removes a cow hide from a drum after it was soaked for 24 hours. Picture: Michel Bega 5/10
Shangase uses a knife to cut one of two shields from a hide which is intended to be used by a Zulu royal family. White cow hides are used to make shields for Zulu royals. Picture: Michel Bega 6/10
A cow hide is rinsed after spending some time soaking in a drum. Picture: Michel Bega 7/10
Shangase stretches a section of hide which will be cut and used for decorative elements in his shields. Picture: Michel Bega 8/10
Slits are cut into the still pliable shield to add decorative features. The shield still needs to be soft at this stage to allow the decorative hide to easily slide into position, but once the shield dries and contracts the strips will be permanently affixed. Picture: Michel Bega 9/10
Shangase uses a hammer to ensure the shield appears flat, hammering out any imperfections in the contour. Picture: Michel Bega 10/10
Shangase examines a shield while other shields adorn the wall of his workshop. Picture: Michel Bega

“The shield must be between being soft and being hard for amagabelo to slide in easily,” he says.

“When the shield hardens, it would be stitched – and it will last forever.”

But that is the last stage, before finishing off with a handle he makes with thin strips of hide.

Shangase invites us to his workshop in the corner behind the shops. He shares the paved, neat, yet smelly open air space with others who make cowhide drums.

“This is where it all begins,” he smiles. He starts by dampening the dry, salted hides so that, when it is malleable after a few hours – “depending on the weather” – he folds it and puts it in a 250l oil drum where it will soak for 24 hours.

He then cleans it with powder soap, rinses it and lets it dry.

“At this stage it is clean and does no longer smell. But it is when it is like this, still a bit soft, that I begin to fashion the shields,” he says.

After a few minutes of checking out the condition of the hide, he decides they will make two shields. With a very sharp knife, he slices the hide with the precision of a surgeon.

“I cannot say how big or small a shield will be until I’ve made it. I am dictated to by the condition of the hide. Sometimes I can make four.”

Then it’s back to Shop 169 – a single room he partitioned into two. The front part with a bright red wall is his shop, where he works on and displays amahawu.

What is left, is his tiny bedroom with a single bed, which also doubles as a recording studio – complete with a PC.

Other shops at Mai Mai, which were originally stables, are bursting at the seams with traditional Zulu apparel, grass mats, calabashes, beaded necklaces, spears…

“I need the space. This space is also for music rehearsals,” says Shangase, who is also a guitarist, singer, composer, and recording artist with four albums under his belt.

The winner of the 2018 Sol Plaatje European Union Poetry Award for IsiZulu has a collection of Zulu short stories he hopes to publish soon.

Shangase arrived in Joburg as a 20-year-old, following his father, who had come years before to seek employment. After working as a cleaner, street photographer and a cook, he decided “I no longer want to work for a white man”.

“My father taught me without really teaching me. I’d watch him work and I learned.

“And he would ask me to, maybe, wash and dry the skins for him, which is a method I am using to this day,” says Shangase, who is originally from Maphumulo, KwaZulu-Natal.

While his granddad may have created the shields to be used in actual combat, his father started – albeit on a part-time basis – the commercial making of shields for use in traditional ceremonies such as weddings and funerals.

“My father was working at Fattis & Monis and after work and at weekends he made the shields here in Mai Mai for extra cash,” says Shangase.

“I got more training from Shangase (not related) who had a shop here. One day he left me to make my own shields.

“Without saying anything, he lined mine with his and once he sold them he gave me the money and said ‘now you can make amahawu’.”

The married father of seven has been doing amahawu for almost 30 years now – a skill his father was taught by his own father and then passed it on to Shangase.

Shangase is proud to still have a cutting tool used by his grandfather and father before him.

But he has since fashioned one for himself to use. His other tools are a carpenter’s hammer to straighten the shields, knives and scissors for cutting and an oil stone to sharpen the knives.

To ensure the shield-making skill is not lost to his family, Shangase has already taught his sons – but they are doing other jobs.

Maybe, like him, he says, “they will realise one day that you can make a living without working for white people”.