Increase of drug and human trafficking is a serious concern for the city, as it compromises security, vulnerable communities and business. 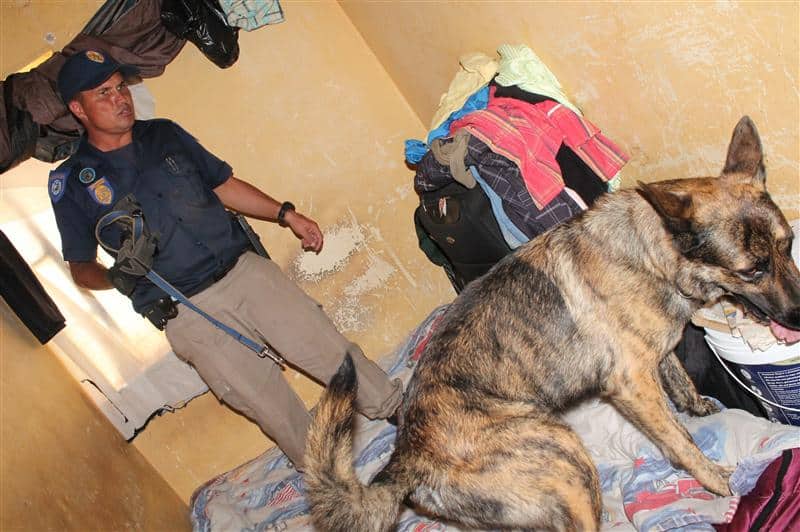 EMPD searched through many one of the rooms on a property that has been converted into backyard dwelling.

One person in his 30s was arrested for drug possession, and various popular drinking spots were served with notices during the mayor’s Siyaqhuba Operation.

Siyaqhuba, which kicked off on February 13 and will continue until Friday, February 24, is a rapid service delivery programme and important assessment mechanism for Ekurhuleni, as the city strives towards integrating all towns.

“We need to deal with the basics, but more importantly reclaim our cities in order to ensure that development happens,” said Ekurhuleni Mayor Mzwandile Masina.

“The increase of drug and human trafficking is a serious concern for the city, as it compromises security, vulnerable communities and business,” the mayor said.

The Siyaqhuba programme involves putting senior officials on the ground with the mayor in order to strengthen accountability.

So far brothels, human trafficking, drugs and illegal occupation of buildings are some of the activities discovered during the operation.

BROTHELS, human trafficking, drugs and illegal occupation of buildings are some of the activities discovered during the operation.

On Thursday last week, the Siyaqhuba project reached Kempton Road. Officials and police targeted illegal advertising, illegal shebeens/taverns, places of residence that were illegally connected to electricity and places that were being rented out to people but did not adhere to city planning bylaws.

Officials from various departments, including city planning, environmental health, energy as well as water and sanitation, joined MMC for community safety Vivian Chauke and MMC for finance and economic development Doctor Xhakaza as the road was cleaned up.

The police department and EMPD’s K9 Unit were also present.

One of the discoveries made was a créche that shares toilets with alleged drug dealers.

According to mayoral spokesperson Gugu Ndima the créche is operating in the same space as other businesses, such as a hair salon and hawkers, where drugs were discovered.

The owner of the créche was also served with a notice by department officials because she did not have the necessary certificates to run the facility.

“Firstly, the créche did not have approval from the department of social development to be operating because such a facility would need to be registered as an ECD [early childhood development] centre,” Ndima confirmed.

“Also, the premises of the créche are not conducive for young children to learn because it is operating amid other facilities such as a church, salon and car wash.”

One of the businesses where drugs were discovered was God is Good Car Wash. Drugs were found stacked in ceilings. The premises were also illegally occupied and had illegal electricity connections.

A group of women, believed to be victims of a possible human trafficking syndicate, were also found in one of the houses on Kempton Road. According to Ndima, some of the women are from Mpumalanga and were brought to Kempton after being promised work.

During the operation the electricity department cut the power to some places of residence which were not legally connected.

A number of properties were found to be containing illegally rented rooms, as they did not comply with certain bylaws, such as the number of rooms allowed on a single property.

One of the houses on Kempton Road that had been converted into shared accommodation contained more than 12 rooms inside, and several shacks and rooms outside. This same house was also illegally connected to electricity, which was cut off, and in one of the rooms about 18 prepaid meters were found mounted on a wall.

18 pre-paid metres were found mounted on the wall in one of the rooms of a property on Kempton Road that was illegally connected to electricity.

Most of the property owners were not present.

Kempton police spokesperson Captain Jethro Mtshali said:  “An investigation will be launched by the relevant department to track down the owners and serve them with the notices.”

Illegal advertising was removed from street poles around the city.

Ward councillor and MMC for community safety Jaco Terblanche said he was very excited about the operation. However, he wondered whether changes implemented by the programme would be permanent.

SOME of the houses on Kempton Road converted into shared accommodation contained more than 12 rooms inside.

“This is an important programme which will fast-track the process of changing the lives of people, for example, by demolishing rooms which are not in a suitable condition for human beings,” Terblanche said.

“However, it is not enough to just issue notices to businesses contravening the law. We need to start closing them. We need to obtain court orders to demolish illegal buildings and shut down illegal liquor outlets.”

Terblanche added the fact that people lived in these kinds of conditions showed there was an urgent need for social housing in Kempton, which must be made a high priority for the metro.

“Other than that, I am positive that this programme is a step in the right direction for Kempton.”