The flat was completely gutted in about 30 minutes. 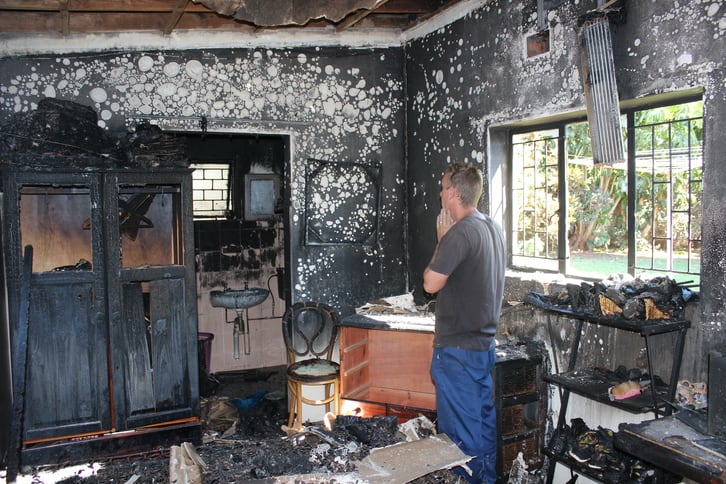 Lizette and Pieter Greeff were at work when they received a call from their landlord, informing them that their flat was on fire.

“We don’t know yet what started the fire, but when I got the call I thought my landlord was playing a prank on me. Then she put my daughter on the phone, and I could hear the trembling and fear in her voice,” said Lizette.

Before being joined by uMhlathuze firefighters, some residents and Alpha Security were on the scene in an attempt to put out the fire, but the flat was completely gutted in about 30 minutes.

An emotional Lizette said she was grateful that her daughter was safe during the ordeal.

“Fortunately, it’s only earthly things that were destroyed, and no one was harmed,” she said.

Husband Pieter said they had lost everything in the blaze.

“We have nothing except the clothes on our backs. It’s sad, you work so hard for so many years, and in a few minutes everything you’ve earned all go up in flames, just like that.”

The Greeffs have been taken in by Lizette’s sister until they can sort out alternative housing arrangements. A family friend, Merinda Ackerman, has opened her doors for donations for the Greeffs.

“I’ve arranged, with permission from the family, for any donations to be dropped off at Walk in Faith at my home at 38 Raphia Palm, Arboretum. I will arrange for the donated items to be delivered to them twice a week,” she said.

The Greeffs will be attending counselling sessions to deal with the traumatic experience.

The cause of the fire is being investigated.