DA leader calls for the finance minister, ‘the Guptas’ Father Christmas’, to go. 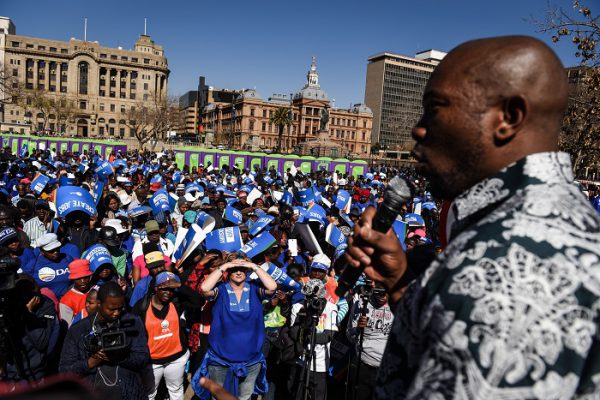 DA leader Mmusi Maimane addresses supporters in Church Square outside the National Treasury offices during a protest against the capture of the Treasury, 20 July 2017, Pretoria. Picture: Jacques Nelles

Finance Minister Malusi Gigaba and President Jacob Zuma were mocked and insulted when Democratic Alliance (DA) leaders protested against alleged state capture by the Gupta family outside the National Treasury in Pretoria yesterday.

Referring to Gigaba as “Gigupta”, DA leader Maimane told more than 1 000 DA supporters at Church Square that the finance minister was placed in his position to support the controversial Guptas’ capture of state-owned entities (SOEs).

Protesting alongside Tshwane mayor Solly Msimanga and Gauteng DA leader John Moodey, Maimane called Gigaba a “junior Jacob” who was being used by the Guptas to pass taxpayers’ money to the “Saxonwold shebeen”.

“We saw Junior Jacob when he was at home affairs and in charge of SOEs. Today he is at the ATM of South Africa, called Treasury. Now at Saxonwold they think Christmas came early because they have deployed their own Father Christmas at Treasury.

“How can they [the ANC] steal from other people to give to one family, then claim they are a revolutionary movement?” he asked.

It was announced on Wednesday that the capital city had secured R2 billion of a targeted R10 billion in investments, but Msimanga said uncertainties around Gigaba’s relationship with the Gupta family was affecting potential investments.

“What is coming out of those e-mails [the leaked Gupta e-mails] is pointing in the direction that he is captured.

“The only way we can be sure he is not captured is if he stands up and says he is not going to allow the Reserve Bank or taxpayers to be captured. He can make such pronouncements in parliament so we can settle uncertain potential investors who want to come into this city.” – rorisangk@citizen.co.za