They're firmly back in the playoff mix, but that can quickly change this week against the formidable Hurricanes. 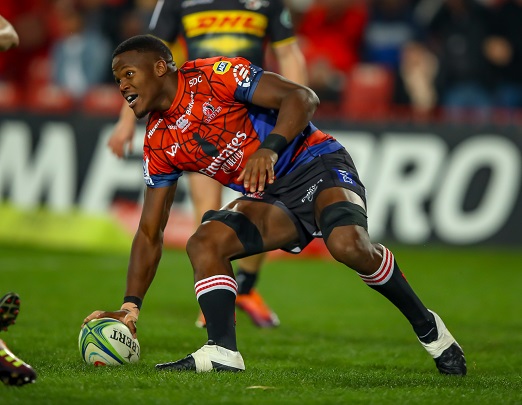 Try time for Hacjivah Dayimani of the Emirates Lions during the Super Rugby match between Emirates Lions and DHL Stormers at Emirates Airline Park on June 01, 2019 in Johannesburg, South Africa. (Photo by Gordon Arons/Gallo Images)

The Lions won’t allow themselves much time to celebrate their emphatic 41-22 demolition of the Stormers, with the Hurricanes next up, coach Swys de Bruin says.

With flank Kwagga Smith and Lionel Mapoe displaying brilliant form at Ellis Park on Saturday, the Lions moved back to fifth in the overall Super Rugby standings and second in the SA Conference.

“It’s important not to get ahead of ourselves,” De Bruin said.

“I watched the Hurricanes play down in Durban and they were fantastic.”

While the Canes overwhelmed the Sharks, however, earning a commanding 30-17 victory at the weekend, their breakdown tactics remained questionable.

“They are very hard in the rucks and I don’t know how legal that is, but we will have to man-up this week before we play them,” De Bruin said.

De Bruin commended rookie flyhalf Shaun Reynolds for the way he stood in for the suspended Elton Jantjies, after the hosts secured their first derby win of the season.

“Can you imagine the pressure on him all week, having to stand in a Springbok’s shoes? But I’m proud of him, he did well.”

Following all the trials and tribulations the squad had faced, De Bruin admitted the Lions had been tested in various ways.

He said he would remember this season for the way the players had stuck together and fought back, with their latest victory keeping them in the hunt for the play-offs.

“We made a subtle change after half-time and the boys reacted well, which for me is a big sign of maturity. We knew what we wanted and they executed, and that makes it a nice day,” he said.

“It was close to being Lions (style) rugby but we probably left about five tries out there, and it’s a concern that we couldn’t finish well.”

De Bruin also credited the Stormers for making a match of it, ensuring it wasn’t a boring game of kicking.

“My heart nearly lost it when they almost gave away that bonus point, but they came back.”