Body suspected to be of missing Heidi Scheepers found

Heidi Scheepers and her children were reported missing by her husband, Ettienne on Tuesday evening. 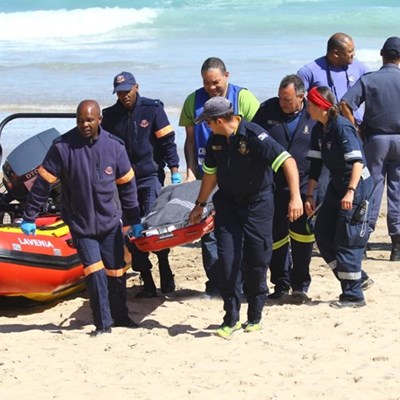 The body of a woman was recovered from the ocean near Herold's Bay beach this afternoon, Saturday 26 October. Photo: Kristy Kolberg

A body believed to be that of missing Heidi Scheepers has been recovered after it was spotted floating in the water on Saturday afternoon, Southern Cape police say.

Heidi, her 2-year-old son Hugo and 6-year-old daughter Cuzette were reported missing on Tuesday after they were last seen in Herolds Bay. Late on Thursday, it was confirmed that the body of 2-year-old Hugo had been recovered in the ocean where it is believed the car they were travelling in plunged.

Police spokesperson Captain Malcolm Pojie said the body was spotted by a local resident of the area.

“The body was recovered and handed over to forensic pathology services,” said Pojie.

He said an autopsy would be conducted later in the week to determine the cause of death.

“At this moment in time we believe it is the body of Scheepers,” said Pojie, adding that a formal identification would be conducted. He said police divers, together with air support, would continue the search for little Cuzette.

Etienne Scheepers – father of the two children – had the heartbreaking task of identifying his small son after rescuers, who worked for hours along a cliff face with crashing seas, found him floating in a gorge.