'The most important thing is never to listen to someone who tells you you're not going to make it,' Bok captain Siya Kolisi said. 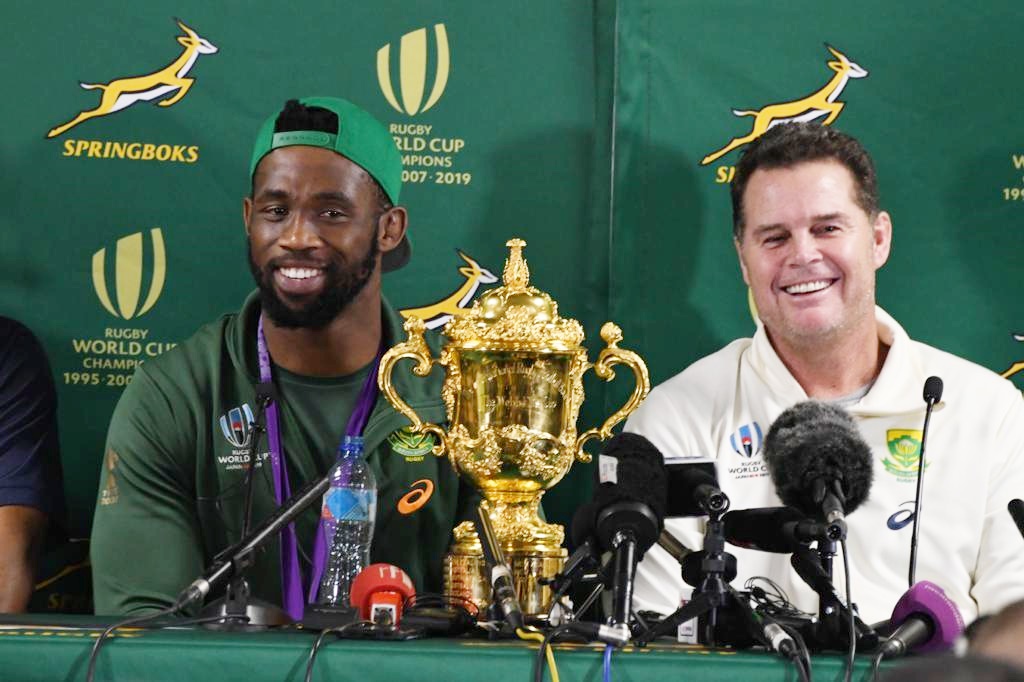 The sounds of Shosholoza rang through the terminals of OR Tambo International Airport as the first batch of the Rugby World Cup-winning Springboks arrived back home from Japan to a sea of jubilant supporters late yesterday afternoon.

But the loudest cheers of all rang out when a smiling Springbok captain Siya Kolisi and coach Rassie Erasmus emerged through the doors to a rapturous welcome.

Fan favourite Faf de Klerk sported a much more formal look than his popular flag-spangled undies, as he and Elton Jantjies were among the first to step out of the terminal gates to loud cheers and the sound of the South African Police Service’s brass band.

Officials also had their hands full managing the throngs of supporters who came to see their returning heroes, with thousands filling up the arrivals lounge and other sections of the airport.

The gorgeous Miss South Africa, Zozibini Tunzi also came to welcome the #Sprinboks. She is seen here taking selfies with some people in the crowds. Hugs were also galore as some people managed to get hugs from Miss SA. #SpringboksArrival @dailysunsa pic.twitter.com/U0UcVoE89z

The operators of the Gautrain had ensured that the Boks got the welcome they deserved by offering free rides to the airport for supporters in Springbok regalia and without luggage.

Even well-known artist Rasta was in the crowd, waving a portrait of Kolisi – and it seemed his painting skills had also received a boost after the Boks’ phenomenal performance in Japan.

One of the team’s most experienced members, utility back Frans Steyn, the only survivor from the team who last won the title in 2007, was overjoyed with the warm welcome awaiting them in Johannesburg.

“I’m much older now than in 2007 and back then, I didn’t quite realise what it meant. But now, having kids of my own going to school, it’s different and I get emotional,” said Steyn, who came on as a second-half substitute in the Boks’ 32-12 mauling of England in the final in Yokohama on Saturday.

“We all have our story to tell. If this win gave a glimmer of hope to the country, I’m glad I played a part in it.”

Wing Makazole Mapimpi, who scored one of the Boks’ two tries – their first in their third final – said it was great to see the wonderful support.

“I am normally not a man of many words, but I want to say thank you to all the amazing supporters and it was great to score in the final,” he said. “I actually spoke to Chessie [Cheslin Kolbe] just before the final and told him I was a little bit scared, but he said it’s going to be amazing – and it was.

“I actually tried to sleep after the final but was awake after five minutes, not realising whether we had won or not,” Mapimpi said.

Man-of-the-Match in the final, No 8 Duane Vermeulen, said the great triumph showed that the national team wasn’t reserved for the privileged few who attended elite rugby schools.

“It doesn’t matter where in the country you play, if you are good enough you will be noticed. Only a small percentage of our squad came out of the so-called top schools,” said Vermeulen.

“All of us are here for a reason. We stand together. Almost half of the squad didn’t even play for the SA under-19s or under-20s, but we were willing to work hard,” he added.

Flank Pieter-Steph du Toit, who was named World Player-of-the-Year on Sunday, said the entire World Cup was an unbelievable experience and one they would cherish forever.

“It was such an incredible journey from the time we got into the camp until we actually lifted the Webb Ellis Cup,” he said.

“It was great to be part of this fantastic team, but now we must keep on working hard to prepare properly for the British & Irish Lions tour of 2021,” he said. “This one is for the entire South Africa.”

“We are privileged to do what we are doing … we know that can give a little bit of hope to the people,” Kolisi told a packed media conference.

“We won because we wanted it a lot. The people here gave us another reason to want it even harder. We had our people with us and it was really special for us.”

Erasmus, who celebrated his 47th birthday on Tuesday, said: “What we want to keep on lasting is what we’re seeing here at the airport (racial unity).

But it was inspirational captain Kolisi who kept the best message for last.

"The Prince(Harry) came to the changing room and said he saw what was happening back at home in South africa and also told us we deserved to win the Webb Ellis Cup" – Siya Kolisi#SpringbokChampions #SpringboksArrival #NewzAtPrime #Newzroom405 pic.twitter.com/TWPMGbLXJJ

"The most important thing is never listen to someone who tells you not going to make it, it's all up to you. I want to tell the kids to KEEP DREAMING, BELIEVING AND PUSHING " – Captain Siya Kolisi's advice to dreamers. #SpringbokChampions #SpringboksArrival #Newzroom405 pic.twitter.com/lZ1kxlfcY7