His mother has reportedly previously brought a court order against him after he allegedly took furniture from their home. 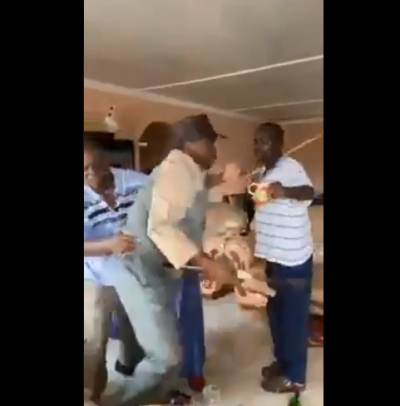 Controversial executive mayor of the Alfred Nzo district municipality Sixolile Mehlomakhulu has again found himself in the headlines following a video showing him in a scuffle with his family in KwaBhaca in the Eastern Cape.

In a video shared on social media by Xola Mehlomakhulu, a claimed relative of his, the mayor can be seen attempting to hit someone with two sticks, as some men restrain him.

“So this guy then realised he was being recorded as the family had been recording all his shenanigans from the time he started vandalising the house. He grabbed my aunt’s phone, pushed her on the ground and ran off with the phone. He didn’t know there was another phone recording,” alleged Xola.

His team smeared something on the car tyres both my mom's and aunt's car tyres … the moment they tried to give chase their front tyres burst … pic.twitter.com/Go5OEHDla3

The mayor was reportedly arrested and spent a night in jail in November last year after allegedly being found in possession of an illegal firearm and ammunition in KwaZulu-Natal.

This happened two months after a court order brought by his mother after he allegedly took lounge and dining room furniture, beds, cutlery and pots from the same house he was filmed at, reported the Daily Dispatch.

He was later released.