Who are the five new caps in the Proteas ODI squad?

You can expect most of them to initially play fringe roles, with the exception of Lutho Sipamla and Kyle Verreynne perhaps. The Proteas on Tuesday announced an ODI squad that confirms it’s in full-blown transition.

Quinton de Kock, installed as the new captain, will arguably now have an opportunity to stamp his own authority on the group, which includes no less than five new caps.

This is who they are. Bristling with attacking talent, the 23-year-old is rapidly forging a reputation as one of the most destructive top-order players in the country.

With two Mzansi Super League campaigns that have delivered 305 and 358 runs behind his name, it wasn’t going to be long before he caught the eye.

Malan has played two T20 internationals, with his debut against Pakistan at the Wanderers producing a measured 33.

Struggles against spin remain, but he’ll relish England’s pace attack should he get the opportunity.

He’s still only 21, but has already played four T20 internationals.

Hailed by Proteas coach Mark Boucher – who’s coached him at the Tshwane Spartans – as one of the most exciting quicks in the country, Sipamla’s gradual rise has been impressive specifically because he’s prioritised skill over pace.

After all, his continued exposure to high performance camps will mean his wiry frame will merely become stronger, and with it, the speed will follow suit.

For now, the former Grey High star and national Under-19 representative vitally adds to black African fast bowling stocks that have been under the microscope in the current Test series against the English and will hope to continue to show the impressive composure he teased with last year against Pakistan and Sri Lanka. 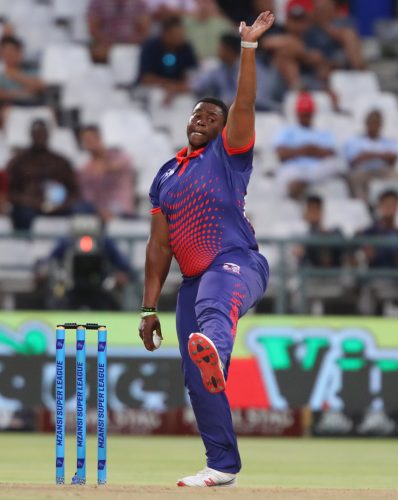 Don’t let the burly frame fool you, Magala is one of the most respected stalwarts in franchise cricket.

While domestic batsmen have admitted his medium pace is deceptive, the 29-year-old relies on skill and a fair amount of guile to take his wickets.

His T20 record in particular stands out, where he’s taken 99 wickets at a fine strike rate of 18 and a decent economy.

The numbers don’t quite show it, but Magala is also a very effective hitter in the lower order and boasts nine first-class fifties across all formats. The 25-year-old left-arm spinner has carved out a niche as one of South Africa’s best tweakers in T20 cricket, but he’s rapidly carrying that skill over into the other formats as well.

Fortuin is a clever player and tongues wagging in India late last year for his ability to out-think his opponents, a great example being how he won a battle with gifted Indian stroke-maker Rishabh Pant in Bangalore.

His batting is more than competent – Fortuin boasts a first-class average of 29 with a highest score of 194 – but is probably more suited to the longer format. Cobras and SA ‘A’ coach Ashwell Prince controversially told the media last year that his 22-year-old lieutenant should’ve be considered for the World Cup.

It’s not a ridiculous thought.

Verreynne is a determined, gifted stroke-maker who averages over 50 in first-class cricket and 40 in one-day cricket.

More importantly, he has a great ability to keep his strike-rate – which is a healthy 93 – up without resorting to fireworks.

On the whole, he’s arguably the one man in the group of new caps who could easily fit into the starting XI immediately and recently strode to a serene 88-ball 74 in the warm-up against England for SA ‘A’.