On the question of whether food parcels should be given to everyone in need, over three quarters of respondents in each income group agreed with this idea. 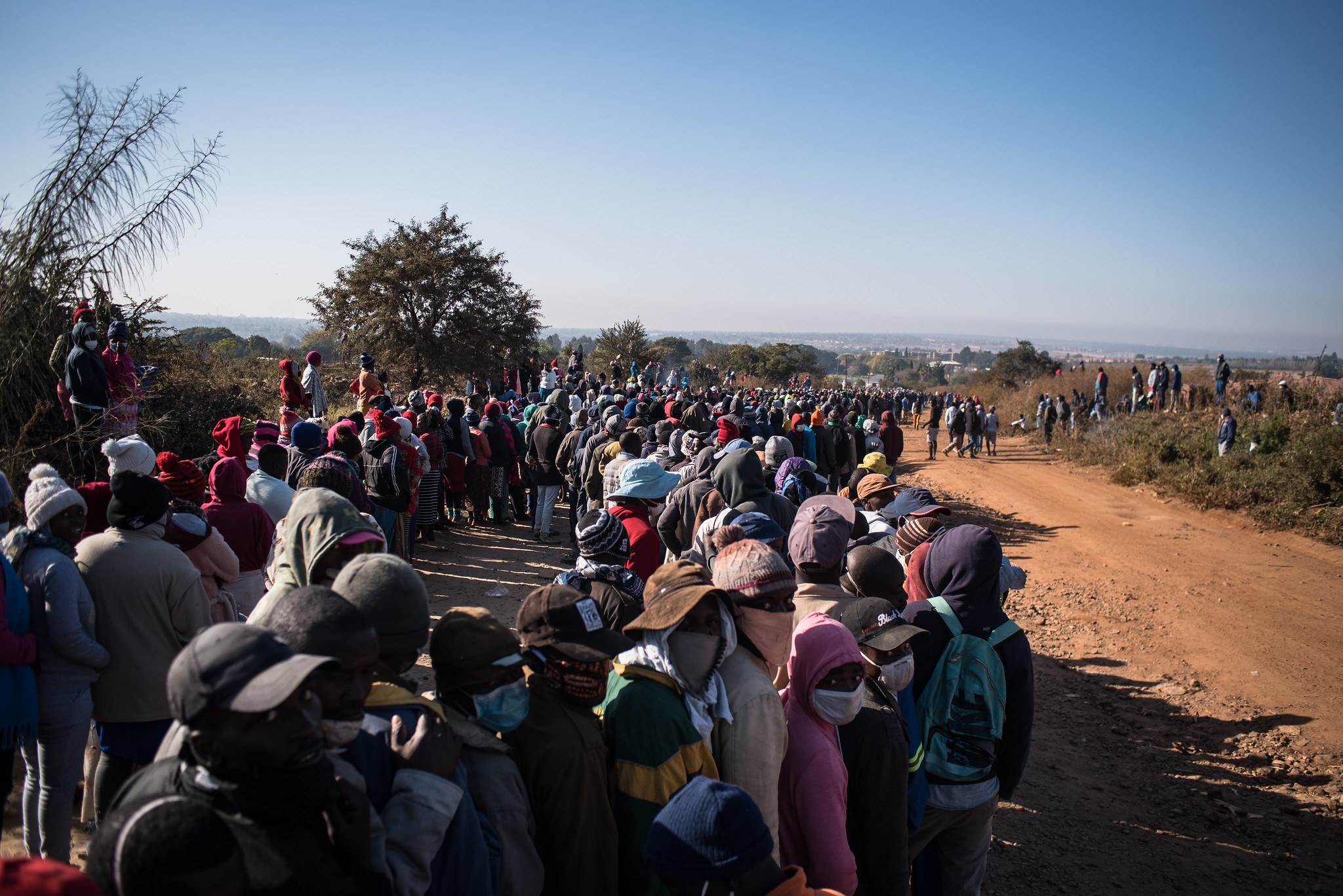 Some of the thousands of residents from an informal settlement in Mooiplaas, called Spruit, can be seen queueing to receive food parcels donated by the Spruit Forum and several NGOs on 14 May 2020, Pretoria. Picture: Jacques Nelles

People from low-income homes have found it difficult to pay their expenses during the lockdown, an online multilingual Covid-19 survey conducted by the University of Johannesburg (UJ) and Human Sciences Research Council (HSRC) has found.

The survey focused on class, mental health and human rights. It set out to determine public perceptions of the economic, social and political impact of the pandemic in South Africa.

A total of 12,312 questionnaires were completed, and the findings weighted to match the country’s statistics on race, age, and education.

UJ’s Centre for Social Change chairperson, Professor Kate Alexander, presented the findings that focused on class, income, mask use, and education during a webinar on Thursday.

She said 67% of people from lower-income homes strongly agreed they had challenges paying their expenses during the lockdown, while 27% of middle-class respondents said they were finding it difficult to make ends meet.

Among higher-income households, 13% of those who took the survey said they struggled to make their monthly payments.

From those who participated in the survey, 83% were in the lower-income bracket, 23% in the middle-income category and 4% in the higher-income group.

More than a third of lower-income earners (34%) indicated they had gone to bed hungry at least once during the lockdown, while 5% of middle-income respondents and 3% of higher earners said they had experienced the same.

On the question of whether food parcels should be given to everyone in need, over three quarters of respondents in each income group agreed with this idea.

Alexander said the food parcel question received a similar response from respondents regardless of income bracket.

“The deputy director reported that less than 800,000 parcels had been distributed by the Department [of Social Development], the Solidarity Fund and non-profit organisations. This figure represents less than 1.5% of the population and can be compared with about 30% going to bed hungry, according to our data.

“Further, the parcels are only expected to last for about three weeks, and we have now had nearly 10 weeks of the lockdown. So very many people are now hungry, many are malnourished, and it is likely that some are starving.”

Alexander said to avoid having people starving, it was important vulnerable people were given food if they could not afford to buy it.

Individuals from all three income brackets were all concerned with their financial situation during the lockdown.

Almost nine out 10 of lower-income respondents said they were concerned about the effect of the pandemic on their financial status, compared to 66% of middle-income earners and 40% of higher-income earners.

On the question of whether they agreed with the extension of the lockdown from 1 May, albeit on level 4, 51% of lower-income people replied in the positive, while over 70% of both middle- and higher-income earners supported the move.

“Now, we go on to think about whether people were taking the lockdown sufficiently seriously. Overwhelmingly, people said the lockdown was not being taken seriously enough. The portion of poorer people giving this response was higher than those on higher incomes – 86% compared to 66%.

“And that’s a question that can be followed through when you look at the question of race and housing type. People in suburban accommodations were less worried – 78% of them not quite so worried in general about whether the lockdown was being taken seriously.

People from lower-income homes were more concerned about the lack of physical distancing than those from the two higher incomes.

“Clearly, it was much easier to practice physical distancing where the population is less dense, people have larger houses and plots.”

This is because of affordability.

“The masks we are talking about are face masks. The point of them is to cover noses and mouths. They’re not chin masks. Often on television and real life, one sees people wearing masks to cover their mouths and not their noses. They are not necklaces either to be worn around your neck.”

People from lower-income homes were more concerned about the negative impact the pandemic had on children’s education, while those in the higher-income group were not so concerned.

Alexander said one might assume those in higher-class categories were in a better position to ensure their children were undergoing online teaching, while this was not the case for those earning lower incomes.

“So, it is to me not at all surprising that many parents, particularly poorer parents, would like to have the opportunity for their children to return to school. But as is the case with many of our brass, with much of the evidence we have collected, people put safety first.