Video of the encounter has since taken social media by storm. 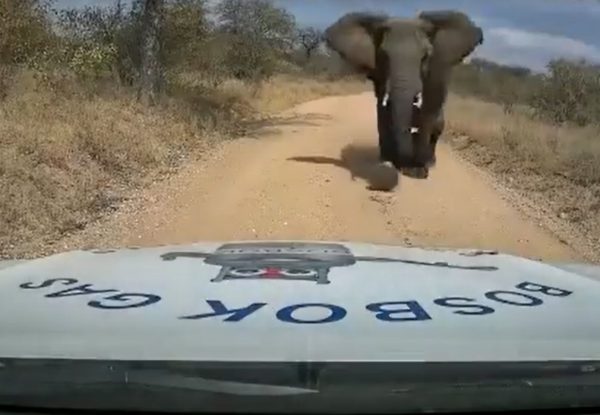 An employee of Bosveld Gas in Hoedspruit, Norman Nukeri, was delivering diesel in Klaserie, Limpopo, near the border separating Kruger National Park from various private game reserves when an elephant attacked his work vehicle.

Elephant pushes bakkie off the road

A video of the encounter has since taken social media by storm. It is likely the elephant was protecting its young. Nukeri confirmed seeing elephant cows and calves nearby.

The angry elephant charged Nukeri’s vehicle, but he remained calm and hit the side of his Toyota with his hand. The noise startled the charging beast, causing it to retreat before charging again.

The elephant then approached a third time, ramming its tusks under the bonnet and crumpling the metal before pushing the vehicle again and returning to the herd. Nukeri phoned his employer, Ruan Geldenhuys, to inform him of the incident. Geldenhuys told Beeld the damage to the company vehicle was about R50,000.

What to do when an elephant attacks

If you ever find yourself face to face with an angry elephant, Getaway Magazine recommends staying calm and giving the animal space by slowly retreating. Some attacks are “bluff charges”, meant to stop a threat before the situation escalates.

Signs of a bluff attack include fanning out its ears to make it appear larger. The elephant may also sway from side to side and pivot its legs from one to the other in what is known as displacement activity.

When it eventually attacks, the elephant will run towards you and attempt to impale and trample you with its tusks. Its ears will also be pinned back during an attack and its trunk will be curled inward.

Biologist and wildlife educator Rob Nelson says the elephant will use its tusk to gore you, throw you off balance and stomp you to death. To avoid that, show you are not a threat by keeping your hands still and slowly retreating from the elephant’s personal space.

Remember, they can run up to 40km an hour, making it near impossible to outrun them. If all else fails and you need to run, do so in a zig-zag pattern and try to get behind a large object – the bigger the better.

Kidnappings on the rise: Several cases investigated in Gauteng
6 hours ago
6 hours ago

Kidnappings on the rise: Several cases investigated in Gauteng
6 hours ago
6 hours ago