Man hitches a lift on back of tanker truck

In a separate incident earlier this year, a motorist took a video of two men sitting in the boot of a moving car in Cape Town. 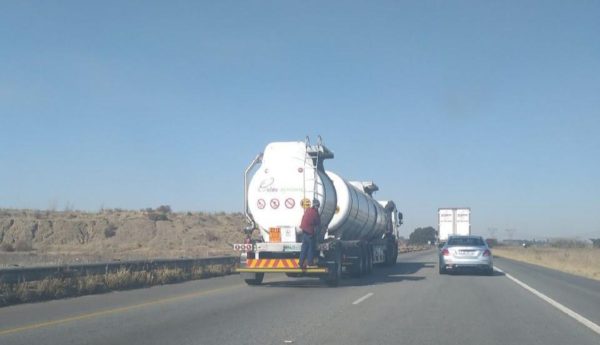 A man shocked motorists on Thursday after illegally hitching a free ride by clinging to the back of a truck without the driver noticing.

Lourika Botha told Vaalweekblad  she was driving from Vereeniging in the direction of Sasolburg on Thursday morning when she noticed the illegal passenger.

The man clung to the back of the truck for dear life and repeatedly peered around to see if the driver had noticed him.

Botha then drove past the truck and realised the driver was not aware of his passenger at all.

“From the front of the truck you could not see there was anyone behind the truck,” she said.

In a separate incident earlier this year, a motorist took a video of two men sitting in the boot of a moving car on Sandown Road in Cape Town.

While the reasons for the men’s action was unknown, social media users speculated the car may have been full, leaving the two men opting for the boot.

South Africans called on law enforcement authorities to attend to such incidents on the roads.

WATCH: Shock as men’s legs are seen in boot of moving car

The incidents come as Transport Minister Fikile Mbalula has called for South Africans to be more responsible on the roads.