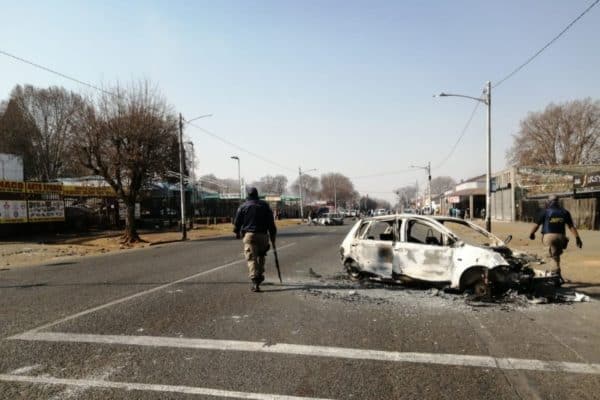 The National Joint Operational and Intelligence Structure (NatJOINTS) confirmed as of the evening of 12 July at 8pm, a total of 489 people have been arrested.

Update: As of 11am, the latest report indicates a total of 757 people have been arrested – 304 in KwaZulu-Natal and 453 in Gauteng. Furthermore, the loss of lives remain worrisome: Four fatalities in KZN and six in GP.

In addition, four police officers were injured while responding to these violent protests and are recovering well.

Arrests as of 12 July

In KwaZulu-Natal, 166 arrests were made, and 323 in Gauteng. In a statement released on Tuesday, NatJOINTS said it welcomed the deployment of the South African National Defence Force (SANDF).

Armed forces were deployed by President Cyril Ramaphosa on 12 July 2021, in support of the operations of the South African Police Service following the acts of violence and intimidation seen in the country.

Ramaphosa vowed to restore order to South Africa and confirmed the SANDF had commenced with pre-deployment processes and procedures to support police operations in KwaZulu-Natal and Gauteng.

The NatJOINTS now intensified deployments in all the affected areas in KwaZulu-Natal and Gauteng as well, which will be augmented by the SAPS’s measures already being put in place, such as calling up operational members from rest days.

“The continuation of the sporadic violent protests throughout the day and night have resulted in the increase in the number of fatalities, with three in KZN and six in GP”, the statement mentioned.

Pat-a-cake... soldier man: SANDF's solution to its crippling lack of funding
8 hours ago
8 hours ago
PREMIUM!

Pat-a-cake... soldier man: SANDF's solution to its crippling lack of funding
8 hours ago
8 hours ago
PREMIUM!